Carnival and Circuses Traveled From City To City By Truck 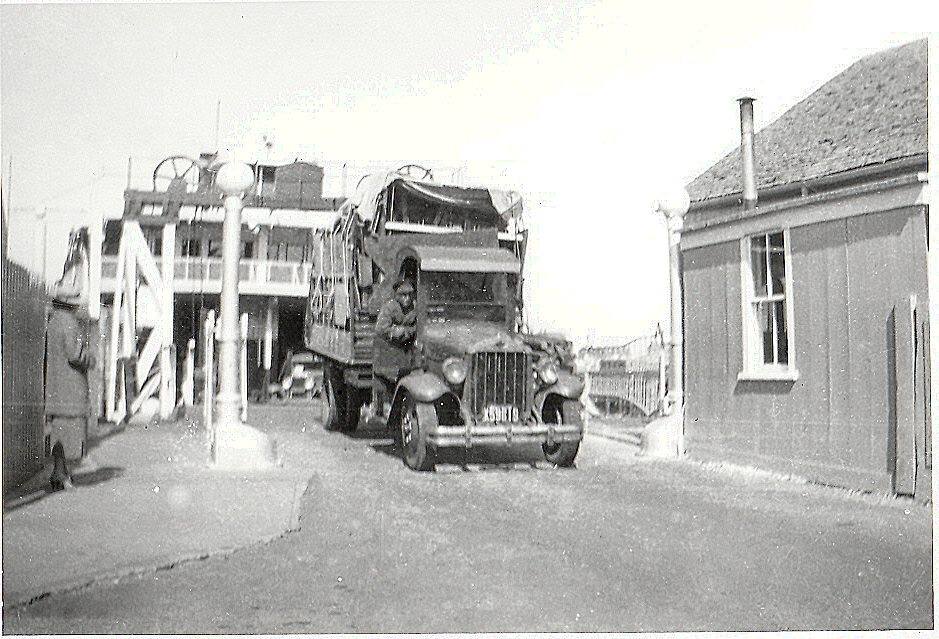 Truck shows came along relatively early in the history of carnival and circus business but were limited in the distance they traveled. At first trucks were little more than motorized wagons and were considered useful only for short hauls and as drayage vehicles to move equipment from the train to the lot. Most highways and roads were undeveloped and unpaved outside of the cities and the gasoline engine was still in it’s infancy. Rain would often make rutted roads impassable and flimsy wooden bridges combined with poorly maintained gravel highways conspired to make every jump a white knuckle experience.

Even when the motor truck finally came into it’s own it was undesirable for the big shows. Vehicles like the ‘Chain drive Mack’s’ were cranky, unreliable and incredibly slow and uncomfortable to drive. Many early trucks had small ‘honeycomb’ radiators which plugged up easily and caused them to constantly overheat on any kind of steep incline. The weight of the big, heavy rides taxed the weight limits a gas engine truck could safely haul and loads were limited. It often took two or three trucks and trailers to move one ride. Weak cotton cord tires blew out with regularity and replacement engine parts could take days or weeks to arrive by train. 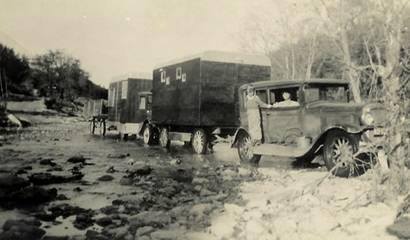 In the days before paved highways were common, jumps were an adventure

With two world wars came gas rationing and it became a challenge to keep tanks topped off. Jumps had to be limited to the area a show could play in relation to the volume of a gasoline tank during those years. Despite these setbacks it was the cheapest way to get into the carnival or circus business on a shoestring budget. Many shows that later prospered got their start in old second hand trucks. The largest show at the time on the west coast, the ‘West Coast Shows’ moved over the mountainous country of California, Oregon, Washington State,Idaho and Montana, regularly scaling mile high peaks like the infamous Donner Pass, for years in old gasoline burning trucks.

Though Ford, Chevy and G M C trucks were in wide use at the time, the real undisputed workhorse of the carnival industry was the’K.B. series and later the ‘R’ series International gasoline tractor. In the later models they boasted a 450 (c i) ‘Red Diamond’, 6 cylinder gas engine, 5 speed main transmission with either a vacuum or electric two speed rear axle and were all out at a breathtaking speed of between 45 and 50 miles an hour ( depending on the head wind ). On early models the air conditioning consisted of a crank out windshield which may have let a lot bugs in but conveniently offset the acrid, noxious fumes from the six cylinder engine that seemed to be constantly vented into the trucks noisy cab. Most were equipped with a vacuum governor to make sure they didn’t exceed their R P M limit, which was highly unlikely unless the truck was racing downhill with no brakes, which often happened with the erratic vacuum over hydraulic brake system. It was said that an old K. B. model “Corn Binder” as they were affectionately referred to, could shake a grown mans kidney loose on a bumpy road, so rough was the ride. For decades many carnivals moved on these venerable old workhorses. 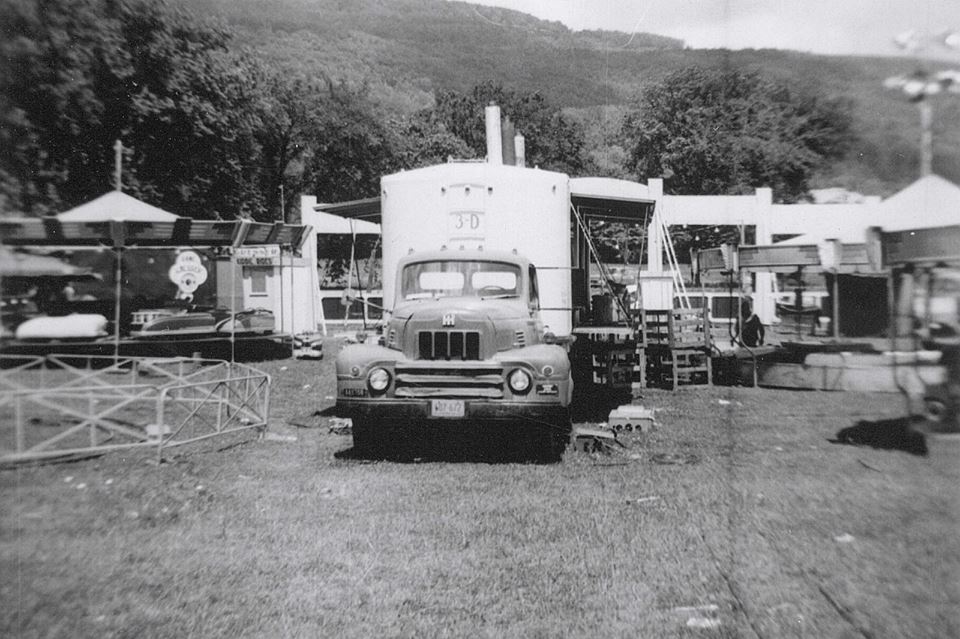 All that changed in the 1960’s when president Dwight D. Eisenhower’s dream finally became reality and the Interstate Highway System came into being. Trucks became heavier with more powerful diesel engines and the shows phased out their old gas burners for the more modern, speedier diesels. Nylon tires were introduced then radials and the 40 foot trailer came into widespread use.

As shows became more mobile, rides became trailer mounted with huge bases weighing as much as a whole ride weighed in the past. Trailers increased their length to over 50 + feet by the year 2000. We take for granted trucks with massive diesel engines that easily move incredible loads in air conditioned comfort, down seamless Interstate highways thousands of miles.

But this phenomenon is a relatively recent development and as fuel prices and insurance costs continue to rise arbitrarily we are confronted once again with another transportation dilemma.

Today, only a single rail show holds out against the complete extinction of the railroad show dinosaurs. Once their were many. In today’s volatile competition for the best dates it is questionable how much longer this lone survivor can hold out against the changing tides of fortune.

Everything seems to come full circle on itself. What will this business look like 50 or 100 Years from now.

Will it exist at all?