You are here: Home / Carnival and Circus Sideshow Banners 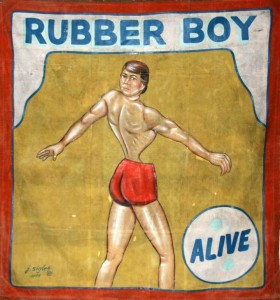 Carnival and Circus Sideshow Banners have been displayed in the Smithsonian, art galleries, and famous museums.

Colorfully hand painted banners are unique to the world of outdoor show business. Flapping under the blue sky in the breeze, they enticed us to ‘take a chance’ and come inside the tent to see the strange and unusal attractions promised by their garish artwork. Painters who excelled in this media like Bobby Wicks, Johnny Meah and Snap Wyatt are legendary and their personally distinctive styles are easily identifiable to the skilled eye. Of these, maybe the best known, if for no other reason than the sheer volume of his work, is the artist Fred Johnson.
Fred G. Johnson was born January 1892 in Chicago Illinois. Fred was a prolific sideshow banner artist whose career spanned 65 years. He has been called the “Picasso” of circus and carnival art.
He was hired at age 14 by the well known banner painter of the day, H. D. Cummins to clean equipment and tack up signs and ad banners. Cummins took him under his wing and taught him to paint show and advertising banners which he excelled at even though he never received any formal art training. Later Johnson went to work for the United States Tent & Awning Co. producing banners for owners Walter and Charles Driver between 1921 and 1930. He worked for the O. Henry Tent and Awning company in Chicago as their ‘in house’ banner painter some 40 years from 1934 to 1974. He later retired at the age of 89 and moved to Sun City, Arizona, where he died at the age of 98 in May of 1990. He was survived by his son Ellsworth, three grandchildren and four great grandchildren.
His banner paintings were displayed in the Century Of Progress Exhibition, in the Chicago World’s Fair of 1933 and by circuses such as Ringling Brothers, Barnum & Bailey, and Clyde Beatty-Cole Bros. and on every carnival and traveling show midway in America for decades. Most of his banners have been lost to time, making those that survive, quite valuable to collectors who are willing to pay hefty prices for them regardless of their condition. Some were auctioned by Sotheby’s in 1981, with titles such as “Minnie Ha-Ha the Monkey Girl” and “Dickie the Penguin Boy”. In July 1989, the State of Illinois Art Center Gallery had an entire exhibit of his work.
Painted on canvas panels and displayed outdoors in all kinds of weather, they were considered “disposable art” by the showmen that used them and were never meant to last more than a few seasons. When they got worn and torn they were indiscriminately used to cover things like chicken coops and leaky wagon roofs but some survivors are preserved in circus museums and we have several nice ones at ours.

Carnival and Circus Sideshow banners are extremely collectible and highly sought after from some of the sideshow banner painter greats like Fred Johnson, Johnny Meah, Jack Sigler, Snap Wyatt, Bobby Wicks, and Jack Cripe to name a few.

Twenty-one paintings are featured in “Sideshow”, an exhibition that highlights a traditional piece of Americana – circus sideshow banners. The work of legendary banner painters Fred Johnson, Snap Wyatt, Jack Cripe, Jack Sigler and Johnny Meah are included in this colorful and dynamic show.

Each sideshow banner painter had their own unique style. 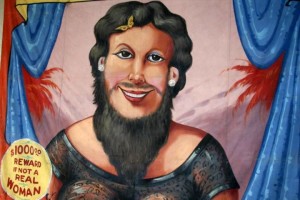 The University of Florida’s University Gallery Featured Some of The  Historical Circus Banners – on display were 21 sideshow banners featured in “Sideshow”, an exhibition that highlighted a traditional piece of Americana – circus sideshow banners. The exhibit, co-curated by Dr. Amy Vigilante for the University of Florida’s University Gallery, included the work of legendary banner painters Fred Johnson, Snap Wyatt, Jack Cripe, Jack Sigler and Johnny Meah.  Click here  and here for the full story.