Tattoo Jack Cripe’s sideshow banner the TATTOO ARTIST IN PERSON is a great example of the many generations of banner paintings that lined carnival midways to advertise sideshow acts.

“Tattoo Jack” Cripe was also Known as as Sailor Jack Cripe, born in 1918 in Elkhart, Indiana but very little of his early history is known. Once in show business he worked as a tattooist, tattoo attraction and banner painter and dabbled with sword swallowing and knife throwing and was known as Baron von Kripe. 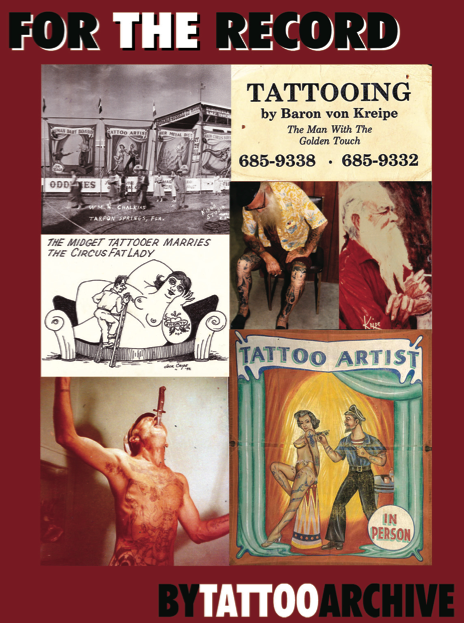 Jack C. Cripe left the show business world for 13 years and sailed as a merchant seaman. Jack had a bodysuit of tattoos, some done by Sailor Katzy and Sailor Barney. He said that he did most of his own tattoos himself because he could not afford work by someone else.

It is unclear when or how Sailor Jack learned banner painting but today he is best known for these banner-painting skills. During 1947, Jack Cripe joined Jack Sigler at Sigler and Sons Art Service with Sigler and Sons Art Service, banner painters in Tampa, and was no longer working the carnival circuit by the early 1950s.  Through the years sideshow banner painter Tattoo Jack Cripe worked with famous banner painters Snap Wyatt and Bobby Wicks (also a tattoo artist). He passed away in Gibsonton, Florida on November 18th, 1982

The Tattoo Archive commissioned Sailor Jack to paint a banner of Betty Broadbent. The following is from a 1990 letter from him to the Archive discussing the banner project.

“I have finally found some suitable canvas. I am having it blown up 6’x 8’. After all Betty B. deserves to be painted life-size on old-fashioned canvas in the old-fashioned circus style. Not only that – I paint better life-size. Of course, I’m going to try to make her appear sexier than her photos. She was quite a girl. Her son “Elephant Red” gave her many problems. He was a real nut. He used to tell everyone I was his father, (not true). I miss old Betty and a whole bunch of my (freak) friends – they’re mostly all dead.”

Sideshow banners also called “valentines” during their heyday at Coney Island in the early 1900s, vividly captured the attention of the American public entetained with the shows on the circus and carnival midways.

With the tremendous growth of traveling carnivals, banner paintings were in great demand. When new sideshow acts or shows changed, the banners were taken down and rolled up for storage, making them the perfect form of advertisements for the carnivals and circuses. Sailor Jack Cripe (1918-1992)