You are here: Home / Carnival Shows Of The Past / Ruben and Cherry Shows

What the carnivals of long ago looked like – just imagine . . . 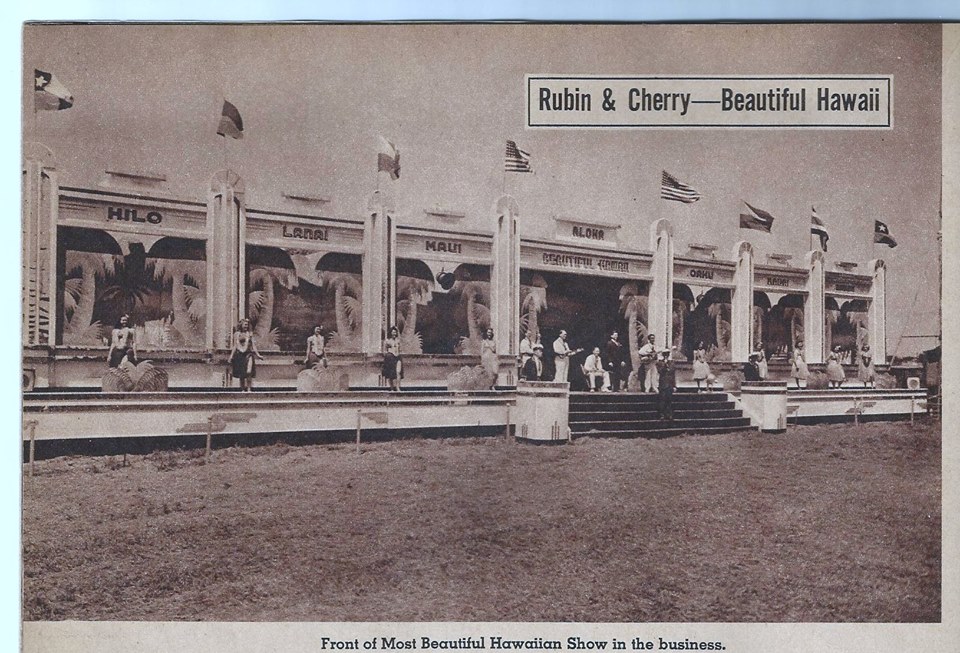 The transition of this business from “show business” to “ride and food business” has been gradual. Although the modern midway of today would be easily recognizable to those who came before us, it barely resembles the sawdust trail of it’s former heyday. Once, before the advent of modern aluminum and fiberglass made towering “mega rides” the rule of the day, huge shows with beautifully crafted fronts were the crown jewels of every midway. If you were part of a big railroad show playing a large fair you might expect to see;
*2 big revue shows (a black and a white girl show) with at least 25 people each including a full band.
*A circus style side show with 20 acts on stage under the big top with a hundred foot bannerline.
*A midget show featuring a troupe of performing little people in full costume.
*A huge water show with various swimmers performing a water ballet in a giant portable swimming pool.
* A Hawaiian show featuring dancing and music from the mysterious islands of paradise.
* An ice skating show.
* A motor drome with daredevil motorcyclist performing on the vertical wooden “Wall Of Death” (and even an occasional lion on a stunt car).
* A menagerie with exotic animals from all over the world.
* A monkey speedway.
*An unborn baby show.
* Various small shows such as illusion & snake shows.

These big productions would collectively employ over 300 people on the midway. Now, except for the occasional small grind show, these and other shows have disappeared from the landscape of the traveling carnival. With few exceptions, today’s show owners, each trying to outdo the other for that “theme park” look don’t want the odd canvas tent and flapping banner line disturbing the dignified ambiance of their midways. But mostly there are no big shows left. The once magnificent fronts were left to rot away in some field, their huge canvas tops a home for rodents and insects, or burned in some forgotten winter quarters.
You can still see the odd motordrome at a biker rally such as the one in Sturgis but it’s an anachronism. The cost of employing over 25 performers plus the men to move such a massive operation and at today’s skyrocketing fuel prices, makes the cost of one of these tremendous productions prohibitive.
Groups like P E T A have been the undoing of all the menageries and animal shows.
T V and multiplex theaters have swept away the appeal of such forms of stage entertainment and modern theme parks scattered throughout the landscape regularly offer sparkling, fresh faced kids in costumed stage shows with pre recorded music as a replacement.
But there was a time……….and what a time it was…..