You are here: Home / Carnival Shows Of The Past / West Coast Shows In The 1960’s 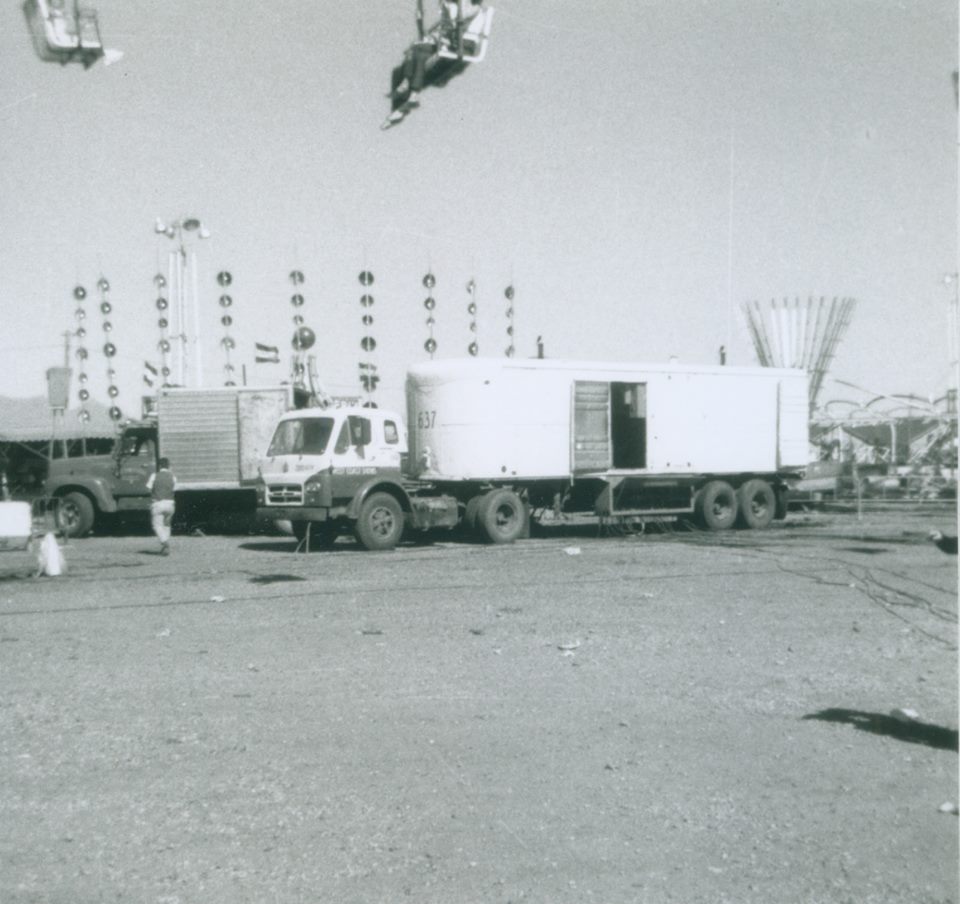 The West Coast Shows truck above is actually an International CO but it looks a lot like the White 3000. It’s under a generator and I was head electrician on this unit that year so I probably drove it at least once. In fact, it may be the very same truck that I was driving that threw a rod through the block along a freeway in Sacramento.

The West Coast Shows had a massive fleet of trucks but they were a mixed breed of equipment. In addition to the CO’s and Whites, they had a lot of International R-190’s and a bunch of GMC’s that had a variety of transmission/ rear end combinations. I can tell you that a driver got a real truck driving education on that show humping those old trucks over the high mountains and vast deserts out there. A driver was never assigned a truck for the season because the equipment was always moved around between units.

A generator might be moved from California to Montana or a ride from Nevada to Oregon depending on the show’s requirements for any given fair during the season. Only the racked tractors like the one on the Tip Top load stayed with the same ride all the time. Gas burner trucks were pulled out of service for extensive repairs and replacement as the newer, more powerful diesels were being phased in.

Few people realize just how big the West Coast Shows really was during the year this photo was taken. We had 5 big units that we constantly moved equipment between spots during the season. We had the California, Arizona, Oregon, Washington, Montana and Idaho State Fairs, a Canadian unit that played the Prairie Fair circuit as well as a lineup of Class A California fairs that included the National Orange show in San Bernardino and the Indio Date Festival and the fair in Imperial just to name a few. We had Helldorado days in Las Vegas and put stuff into Pomona for the L.A. County Fair during its run.

We had 4 Rock-O-Planes 5 Tilt A Whirls and 4 Scramblers. We had 2 Meteors and 2 Sky Wheels including the ground mounted Velare Sky Wheel. I don’t even know how many Merry Go Rounds or Wheels we had. We had a 1000 KW generator at one time that I had to stand on a ladder to add water to the radiator. We had a jet turbine generator that howled so bad you couldn’t hear the merry go round music. We bought the entire Craft’s 20 Big shows, winter quarters and all, and made a single unit out of it. We played major fairs in California, Oregon, Washington State, Idaho, Montana, Utah, Nevada, and Arizona as well as Canada during the season. This show was actually bigger than the Royal American Shows… but it was a western truck show and never got the notoriety of the big railroad show.