Bringing To Life The Amusement Corporation of America 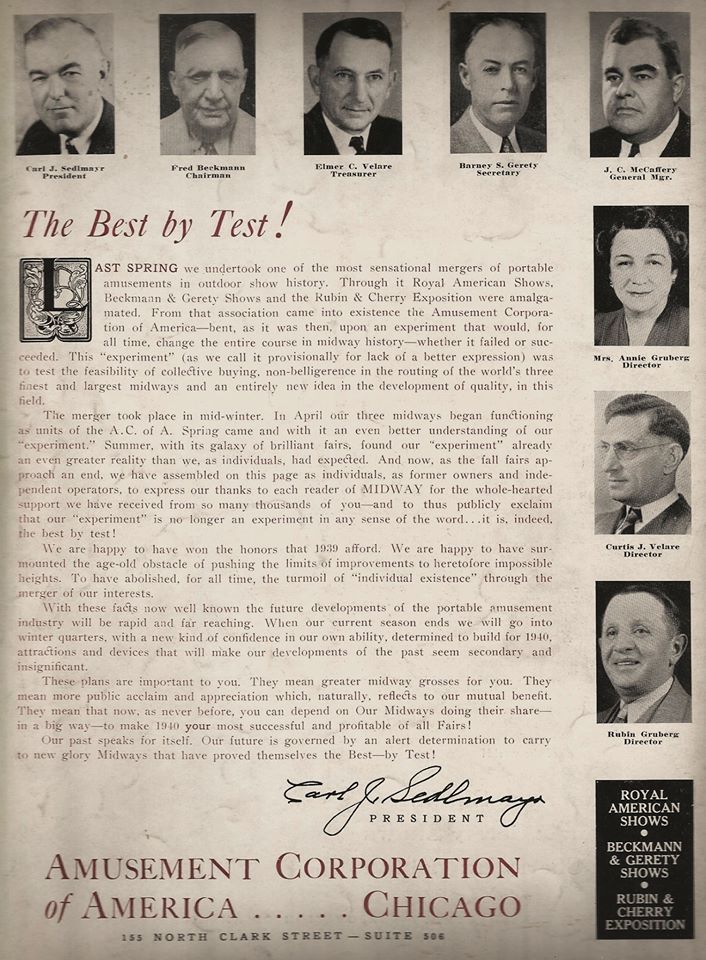 Royal American Shows, The Beckman and Gerety Shows, and the Rubin and Cherry Exposition Shows collaborate together instead of compete against each other.

In 1938 owners of the three largest railroad shows in the United States of America came together to try an experiment. They were the Royal American Shows, The Beckman and Gerety Shows and the Rubin and Cherry Exposition Shows and they formed the Amusement Corporation of America, where the largest Carnival Railroad Shows collaborate instead of compete .

The premise of the Amusement Corporation of America or A C A for short was a simple one on it’s face but depended on the complete cooperation of men who were known to be hard charging mavericks and were locked into a highly competitive business with each other.

The idea for the Amusement Corporation of America, was that they would share their rides, shows and equipment as it was needed. Also, and this was of primary importance, they would not get sucked into bidding wars against each other for the choice fairs on their routes. They figured if the fair committees couldn’t play them against each other, they could collectively keep the rising price of the contracts down to reasonable figures.

This spirit of cooperation with the Amusement Corporation of America wasn’t born out of love for one another but necessity. The height of the depression was on and the difference in dollars meant the very survival of many shows.

The Amusement Corporation of America was a rousing success. As time went on, more shows saw the advantages of not having to go it alone and many names, like Olson and truck shows like L.J. Heth became aligned with the A C A.

These first men, all highly skilled in business saw the merit in working together and keeping their agreements with each other. They did business with a handshake and their word was sacrosanct.

Unfortunately they all slipped away, one at a time, until there were none left.

The new generation, that came barreling along after them, was of a different mindset. They were college educated with degrees in business and law. They didn’t play well with others and saw no benefit in keeping their word when it came to doing business. Their philosophy was that it was every man for himself, dog eat dog, and may the best man win.

Starting in the 1960’s and 70’s and continuing through today, the bidding for fairs has escalated to astronomical proportions with only the fair committees coming out the eventual winners. You can imagine what happened to the Amusement Corporation of America that’s why the concept was perfect to have the largest Carnival Railroad Shows collaborate instead of compete .

Today most carnivals operate on a margin that leaves very little room for error and would turn many of the old timers hair white. The appetite of the committees for more and more money seems to be insatiable and their list of demands continues to grow. They want it all. The lesson the old timers understood is that ‘once the genie is out of the bottle there’s no putting it back’.

Modern carnival owners are realizing that in today’s struggling economy, increasing concession privileges and ticket prices aren’t limitless things. There’s a ceiling to what the public will pay for a ride on the Ferris Wheel and a what a concessionaire can afford in rent and dings and still stay in business.

Competition for the amusement dollar has become frantic in the 21st century and with out of control expenses and tighter regulations plaguing todays shows it will become interesting to see who can go the distance in the future.

It’s for certain we will see more than a few of the big stars fall from the sky just as we did so many years ago.

Perhaps the antiquated ideas of those old, sharp eyed carnival owners of yesteryear could stand some revue.