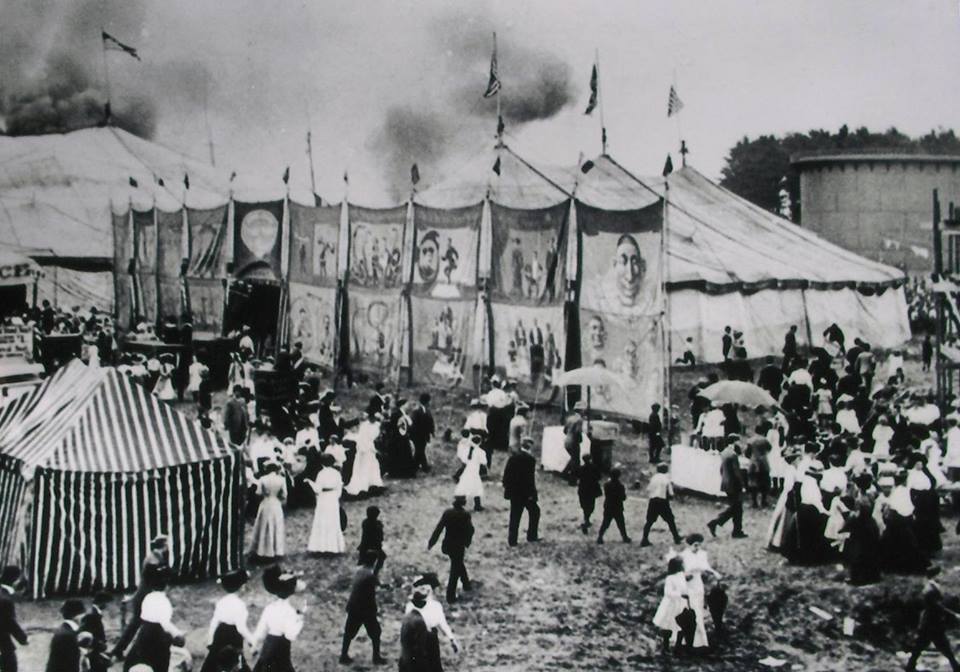 In the background of this photo, taken in Schenectady New York, the exotic animal menagerie catches fire in 1910 and the Big top canvas is being consumed by fire as bystanders hurry from the scene.

It was common practice in the old days to “waterproof” the canvas tops by brushing liberal coats of a mixture made of paraffin and gasoline on them at regular intervals when needed.

It kept the audience and performers dry as toast but unfortunately it turned the heavy cotton canvas duck cloth and manilla hemp rope tops into incendiary bombs that could be touched off by anything from a hot cinder from a cook house stove or passing train to a wanton cigarette ash. It was a real concern and precautions were always taken to prevent things like the mishap when the Animal Menagerie Catches Fire In 1910. The fire was put pout quickly and not much damage was done in this fire.

The most memorable and well publicized of these fires was the terrible Hartford Connecticut tragedy that signaled the end of “Big Bertha” the mighty canvas big top of the Ringling Bros Circus, forever.

The Ringling Menagerie tent was huge and the animal cages went all the way around the tent between the side poles and the three quarter poles. The public was treated to seeing – up close – every exotic animal you could think of at the Animal Menagerie. It was a once in a lifetime experience.