Headliner For Ringling Brothers Barnum and Bailey Circus Lillian Leitzel’s record was an amazing 249 revolutions as the crowd counted in amazement! 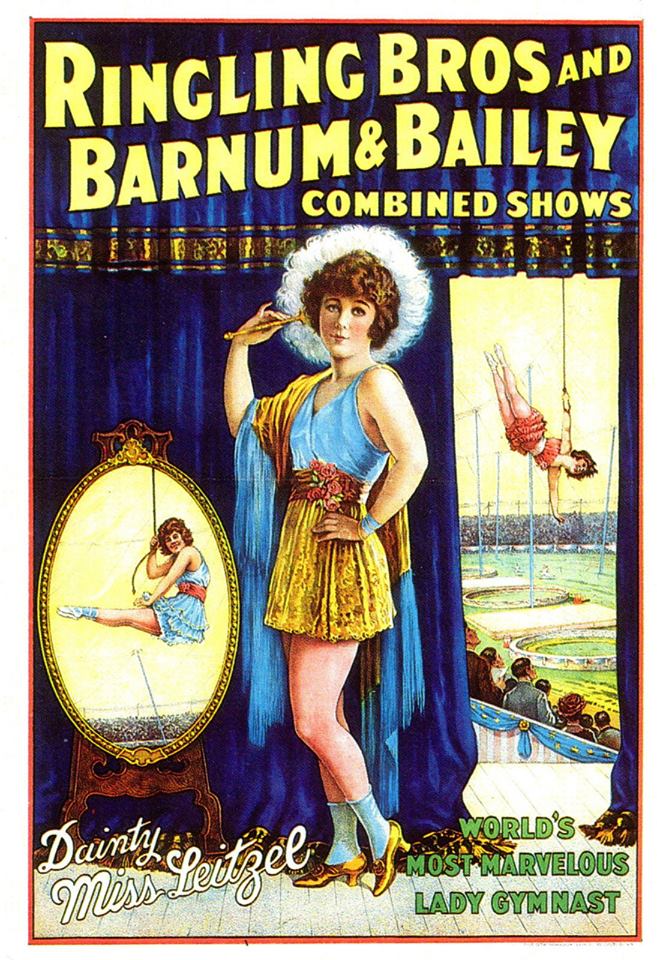 Lillian Leitzel was born January 2,1892 in Breslua, Germany as Leopoldina Alitza Pelikan to a family of circus performers. Her father was a Hungarian army officer and theater performer. Her mother was a Czech circus acrobat. She spent her childhood in Germany where she lived with her maternal grandparents.

Although she had been well-educated and had prepared to pursue a career as a concert pianist, she joined her mother’s aerobatic circus group, the Leamy Ladies.

In 1910, she came to the United States with the circus troupe and performed with Barnum and Bailey. The group later dissolved and its members returned to Europe, but Leitzel continued to attempt to perform in the American vaudeville circuit. 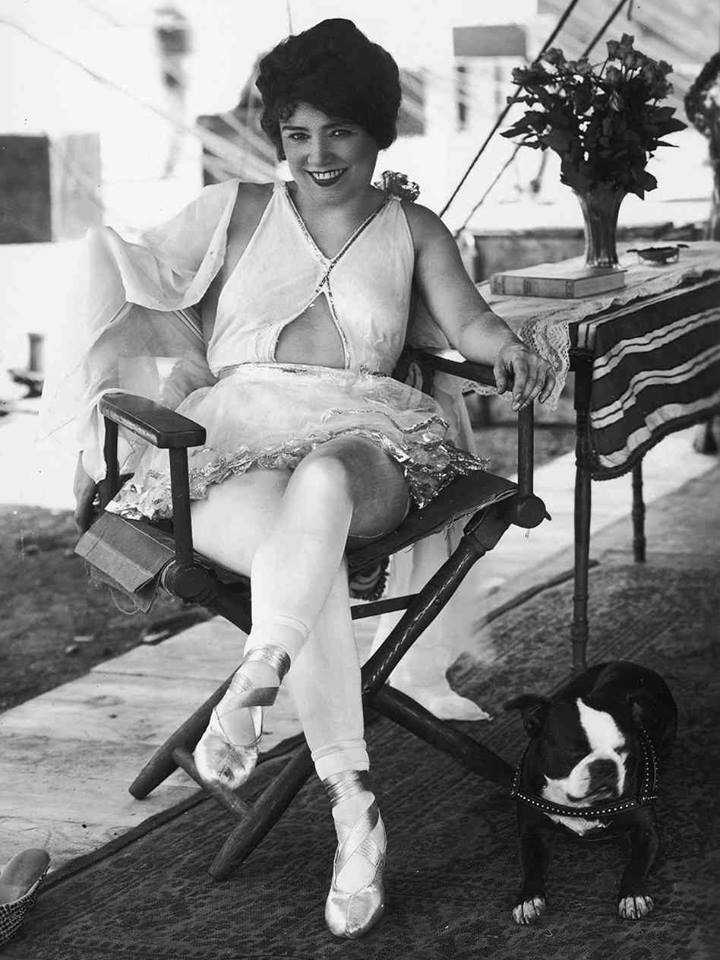 In November 1914,in South Bend, Indiana, she was seen by an agent of the Ringling Brothers who offered her a contract on the spot. When Ringling Brothers and Barnum and Bailey merged, she became a huge star and a headline performer for the circus.

The 4 foot 9 inch, 95 pound Leitzel made her solo Big Top debut on April 17, 1915 at the Coliseum in Chicago. Leitzel was a Ring 2 headline performer from the outset where she remained throughout the rest of her life.

She was a featured performer with Ringling Bros. in 1915, 1916 and 1918, moving to the headline spot with Barnum & Bailey for the 1917 season. After the shows combined in 1919, Leitzel was considered the premier personality through 1930.

Her astounding feats of strength and grueling endurance wowed Circus audiences everywhere. Leitzel’s act included one-armed planges, momentarily dislocating the shoulder during each plange. She would flip her body over her shoulder repeatedly, sometimes hundreds of times in a feat of endurance, encouraging the audience to count each one in unison. It was not uncommon for Leitzel to do 100 revolutions during a performance. Leitzel’s record was an amazing 249 revolutions! Audiences loved her.

In this piece of rare footage, from 1929 the amazing Lillian Leitzel can be seen performing once again . . .

She was also famous for her demanding personality and temper. Leitzel was the first performer in history to command her own private Pullman car and dressing tent completely furnished with her own baby grand piano. Her quick temper was legendary. It was not uncommon to witness Leitzel cursing or slapping a roustabout who did not adjust her rigging exactly to her liking. Further, Leitzel was known to fly off the handle and fire and rehire her personal maid, Mabel Cummings several times a day.

In sharp contrast, it was the same hot tempered prima donna who was known to the children on the show as “Auntie Leitzel” and who would hold birthday parties for her fellow performers in her private dressing tent.

Although pursued by many wealthy suitors, she married a series of circus individuals and never had any children. She first married a minor circus stagehand, then the side show manager Clyde Ingalls (ending in divorce in 1924), and finally the love of her life, the circus trapeze performer Alfredo Codona in 1928.

Leitzel and Codona were tireless performers, even scheduling engagements during the circus winter break. During one of these breaks, on February 13, 1931 Leitzel was performing at Valencia Hall in Copenhagen, Denmark, and Codona at Winter Garden in Berlin. Shortly after midnight, Leitzel finished up her Roman rings presentation and ascended into the air to begin her infamous one-arm planges. On that night, the brass swivel on the rope that had crystallized, broke. She fell over 45 feet to a hard, concrete floor. She suffered a concussion and spinal injuries in the fall, but doctors were confident she’d recover. Codona rushed to her side but she insisted she was fine and urged Codona to return to Berlin to finish his engagement. She boarded a train with him and the pair headed back to Berlin when she died suddenly 2 days later at 2:09 am, Sunday, February 15th.

She was buried in Inglewood Park Cemetery in Inglewood, California. Alfredo Codona was devastated by her death. 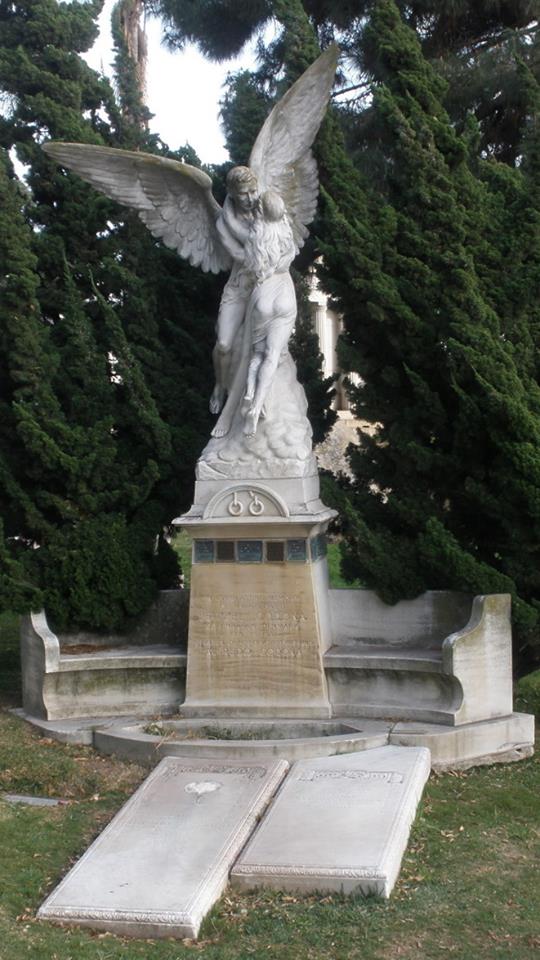 At first glance, it appears that the statue, titled “Reunion,” represents an angel embracing Leitzel and taking her to heaven. But if the figure of the woman on the statue is supposed to represent Leitzel, the handsome, wavy-haired angel looks amazingly like Codona, based on the small photograph of him on his grave marker. Perhaps the angel is not really an angel at all, and the statue is merely a representation of Codona’s love for Leitzel, with the wings as a symbol of his life as an aerialist.

Just below the woman’s feet on the statue are carved two small rings — the same type of rings Leitzel used in her famous swing-over routine. One of the rings is firmly attached to a rope, but above the other ring, the rope is broken.

Leitzel is probably the first and certainly one of the most enduring circus luminaries of all time. Her celebrated life, tragic death and enduring legend haunts the circus world even today. She commanded top billing longer than any other circus performer in history and truly earned her position as “Queen Of The Air”.
Cordona went on to remarry another aerialist named Vera Bruce, but their marriage was a miserable one. Distraught and unsettled, Codona became increasingly reckless in his act and finally suffered a bad fall as a result. Doctors informed Codona that the torn ligaments in his shoulder would prevent him from ever performing again and “grounded” him in 1937.  The stress of Leitzel’s passing and the end of his circus career drove Codona to desperate measures. While discussing divorce proceedings in Vera Bruce’s attorney’s office, Codona asked if he could speak to his estranged wife in private. The attorney obliged and as the door closed behind him, Codona pulled a pistol from his coat pocket and shot Vera Bruce before turning the gun on himself.