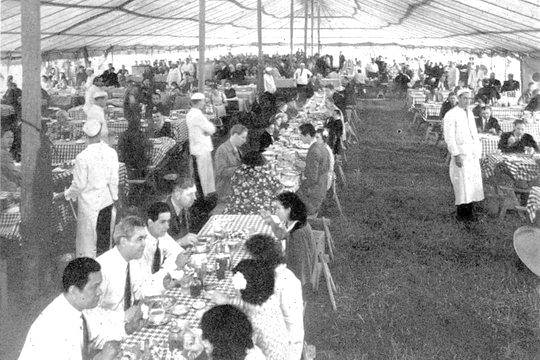 Imagine the entire population of a show with 1200 people eating 3 full meals a day, seven days a week, week after week and you get an idea of what it was like for the Ringling Brothers Circus cookhouse crew in the 1930’s.

Originally cookhouses were crude, dirty affairs. The show, reluctant to shake loose with any money for anything that didn’t “tear a ticket”, saw little reason to spend money on feeding the help. The meals were cooked on what was known as a “Maria”, which was nothing more than a large sheet of tin laid across some stones, a fire built underneath and meat fried on it. The bill of fare was steak and boiled potatoes, a stew for lunch and a boiled meat for supper. Pastry was unknown and butter was only served in rare cases, while to get eggs meant a bribe for both cook and waiter. 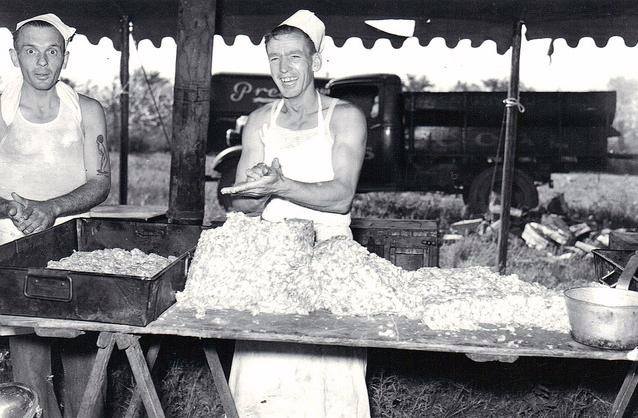 In those days a cook-house was operated at an average cost of not over ten cents per meal (1900-1920 money). In the old days the cook was not engaged for his ability to cook, but for his ability to work and was given other tasks. Men such as Addy Moreland, George Klein, George Arlington, the Davis Brothers, Ollie Webb, Charles Henry, Fred Seymour and Dixie Engles were instrumental in changing all of that.

The Barnum and Bailey Circus gets the credit for the first radical improvement in the cook-house. The duo of Cole and Klein were given the contract in the mid 1920’s and the improvements made by them over the old methods were wonderful. Real chefs were engaged, real food was served and over time the bill of fare equaled anything one could expect in a well established restaurant.

George Arlington was the pioneer in transforming the cook-house into the modern restaurant on wheels. He was the first to use ‘range wagons’ and it was he who introduced the ‘steam plant’. The cook-house, under the management of Mr. and Mrs. Arlington, cost to equip alone as much money as it cost to equip many a circus. The tableware was all silver-plated, the starched linen the best, a portable laundry furnished fresh linen daily, a specially designed bake-oven gave the folks pastry, fresh bread and pies twice a day. The one man cook evolved into a soup cook, a pastry cook, a meat cook, fry cooks, broilers, butchers, bakers, a vegetable cook and a pantry man. The cooks were hired from the best hotels in Chicago and were all trained and inspected. Trained head waiters roamed the dining-room tent to see that the service was perfect.

The legendary Ollie Webb was known for his always sunny disposition and tireless efforts as the head steward on the show for decades. There was not a major hotel anywhere in the country that could boast a more complete kitchen and this particular kitchen MOVED EVERY DAY! At it’s peak, the Ringling Brothers cookhouse employed over 150 people in it’s culinary department. A steam plant made sure everything was sanitary and well cooked and a refrigerator wagon made sure all meat and vegetables were kept fresh. The meals were cooked on portable gasoline stoves and ovens. 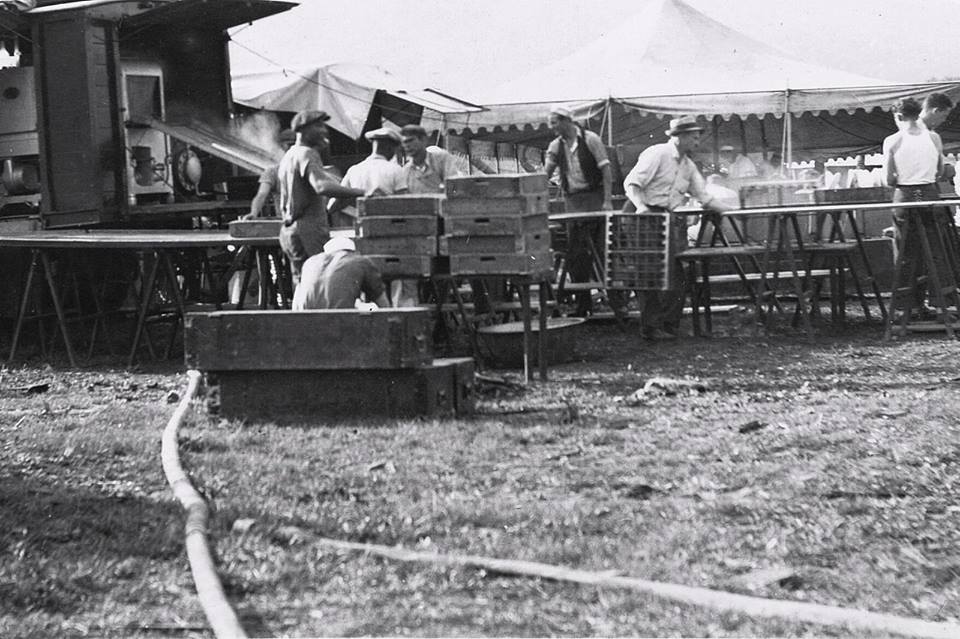 This was mountainous task, something that not even the military could pull off today with their modern portable ‘mess tents’ (they substitute meals in the field with boxed M.R.E. ‘s). The effort and energy that went into feeding this hungry, hard working crew was a testament to the ingenuity and hard work of people of this era. It won’t be seen again.