You are here: Home / Circus History / Bros. and Barnum and Bailey Train Unloading 1932

The Work Begins On Ringling – Unloading the Train in 1932

Trains Haul The Ringling Circus from Town To Town 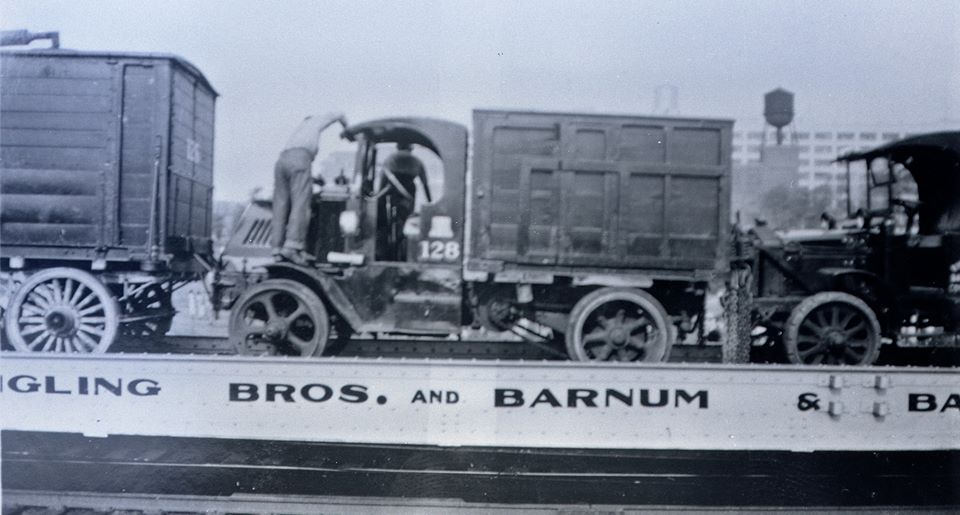 Before being unloaded, the train crew tests the trucks to make sure they will start and warm them up.

A cranky vehicle that won’t start can slow the whole process and bring unloading the train to a grinding halt.

Often they need to be primed with gasoline or ‘jumped off’ before the old six volt starter will crank them over.

During the 1920’s and most of the 1930’s the show was in its hey day and tops in interest as for as the fans were concerned.

A 1932 train loading list is printed with this article and the wagons are typical of this period of the shows history, probably the finest baggage wagons ever built for any show and also a first class group of cage wagons. The Big Show was one of the last to abandon 60 foot wooden flat cars but in the late 1920’s they took delivery of forty steel 70 foot Warren flat cars. The stock cars had been 72 feet in length for the entire history of the Combined Shows, I believe.

While the show traveled in four sections there were no flat cars on the fourth section. The first section was called the Flying Squadron and carried the layout gang and stake drivers as well as the cookhouse, blacksmith shop and baggage stock tents and equipment, plus the menagerie top and the cages loaded on 15 flat cars. Three cars of baggage stock plus four coaches for the personnel made a total of 22 cars for this section which left town by 11 p.m. as a rule.

The third section carried two stock cars that held what could be called supplies and extras. Last year’s big top, some extra tent poles, plus lumber of various sizes to repair wagons, seats and so on. Also some steel for use by the blacksmith shop in making repairs. Additional supplies of stock to be sold by the concession department were carried in these cars as well as some hay, oats and bran used to feed the stock. Coaches on the third section housed personnel traveling with it. The third section left town within an hour after the second section, which was unloaded before the third section, upon reaching tomorrows town.

During a part of the evening, after the big show performance was over, the second and third section flat cars were being loaded at the same time. So the trainmaster had quite a bit of choice in loading the wagons as they came down to the runs. So one night some of the wagons might be loaded on the second section and the next night they might be loaded on the third section, or vice versa. Important wagons that would be needed as early as possible the next morning were of course loaded on the second section. This would apply in particular to stake and chain wagons, big top pole, rigging and canvas wagons and so on.

Probably all 40 of the flat cars were never loaded exactly the some way twice, as wagons of the same length could be interchanged and some wagons were even loaded on different sections. But wagons carrying important equipment were always loaded on the proper section. In quite a few cases several wagons were usually loaded together. For example No. 49 almost always followed No. 58, with a 16 foot wagon behind it to fill out the car. Also No. 32 and 33 were practically always loaded on one car and they just filled it. No. 119 and 120 were usually loaded together with a third wagon to fill out the car. The show carried three ticket wagons and one was carried on each of the first three sections as a rule.

Back in the 1920’s the show had some Mack and some Pierce-Arrow tractors but by the late 1920’s all the latter had been replaced with Macks and as time went on a few more were carried than they had in earlier years. About three of these usually went on the first section and the rest of them on the second.

The No. 125 wagon was built to haul Pawah the White Elephant between the runs and the lot in 1927 when he traveled with the show so that the towners wouldn’t get a free look at him. It had a double drop frame similar to a giraffe wagon. In 1928 and for some years afterward it was used for props and trunks. Toward the end of the 1930’s it become the No. 109 menagerie trapping wagon, or “meat wagon” as it was popularly called.

In 1928 Goliath the Sea Elephant was featured on the show and he required two wagons. Both had stakes along the sides similar to a jack wagon. No. 151 was 18 feet long and was used to haul Goliath around, for his appearance in the big top and also between the runs and the lot. No. 154 was 16 feet long and had an enclosed portion covering about the front third of the wagon to house a water pump. The open portion behind this carried the canvas tank that was set up in the backyard that Goliath stayed in between performances. The pump was used to empty the tank before it was rolled up and loaded on the wagon. Both these wagons went to the Sells-Floto show when Goliath was a feature on S-F in 1932 for its last season. No. 151 was rebuilt into the Frigidaire polar bear float on Hagenbeck-Wallace in 1934.

In the early part of the 1920’s when R-B presented cat acts in steel arenas the performing cats were housed in cage wagons kept in the backyard. These were numbered 140 to 150 inclusive and varied in length from 16 to 24 feet. These cage wagons, as well as the two for the sea lions, were loaded on the third section. Incidentally, in those days they didn’t use chutes for the cats to run through on their way to the steel arenas as Clyde Beatty and Terrell Jacobs did in the 1930’s. Some seasons cage wagons about 14 feet long pulled by a two horse team were used to bring the cats into the steel arenas. Other seasons smaller cages about 10 feet long and mounted on pneumatic tires were used for this purpose. A large group of prop boys pulled and pushed these wagons in and out of the big top. Some seasons three steel arenas were used, one in each ring, while other seasons four were used, one on each stage.

Originally the three water wagons No. 102, 103 and 104, all had round tanks. About 1930 two new wagons were built with square tanks. Although they were a bit shorter their capacity was greater than the old wagons. These two new wagons were numbered 102 and 104, I believe 1936 was the last season for these tank wagons as a number of Mack tractors were equipped with water tanks by that time so took their place.

If anyone has any information on cages with numbers 68, 72 or 75 in years prior to 1935 the writer would be most interested to hear about them, or about any corrections or additions to this list or these remarks.

Even though there have been no circus wagons in actual use anywhere in the country for several years now, there are a few in museums at various locations. It is doubtful if we will ever have a flat car type circus on the road again. “Gone, but not forgotten” would apply here. A circus wagon is one of the finest things ever built by man and they live on in the photo collections and in the memories of all circus fans who were fortunate enough to see them, back in the “good old days.”

A total of 145 pieces loaded on 40 flat cars for an average of about 3.6 pieces per flat car. The lengths given for the wagons are the actual lengths of the bodies, not the space taken up on the flat car.

The Railroad Tradition at Ringling Bros.

The following organizations conduct unannounced inspections of each unit on a regular basis: