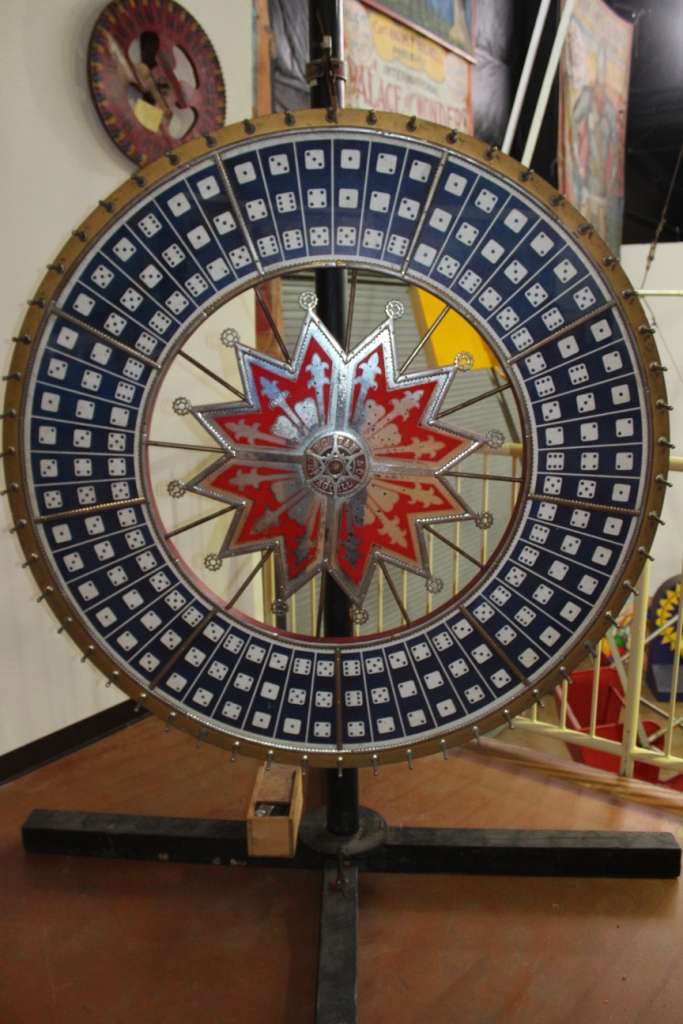 A beautiful antique ‘Big-6’ Gaming Wheel is part of our midway Games & Concessions section in the museum.

The Big 6 Gaming Wheel was a gambling device made by the Evans Company in Chicago, Illinois. It featured numbers from 1 – 6 represented by dice that corresponded to those painted on a three sided counter around the perimeter of the game. Odds were determined by the number of the matching dice. (1 six = 1 to 1 odds.  2 Sixes = 2 to one odds, etc) This wheel is 60 inches in diameter and came mounted on an eight foot post. It sold originally in the Evan s Catalog of the 1930’s for $200.00 with an optional cloth lay down for $7.50 and heavy leather indicator for a $1.25.

Not all wheels gamble for money. Some played for a nickel box of candy. There was even a grocery wheel which got the lucky winner a cloth wrapped ham, pound of bacon, or a pound of coffee. From the earliest days of the carnival business wheels were  like this were popular.  And every carnival, regardless of its size, had at least a couple of its midway.

The carnival wheel went away in the 1960’s when individual states began enforcing stricter laws against gambling on a midway.

Today gambling games like this have become a thing of the past except in states hosting big casinos where they are strictly regulated by the states gaming commission. A trip a cross the border into Canada during their fair season will still allow you a chance to play the Big 6 Wheel on a fairground midway where the Crown And Anchor Wheel is very popular with fairgoers.

When you visit the Showmen’s Museum you will find lots of gaming wheels up on the second floor in the game section.