You are here: Home / EXHIBITS / The Sideshow Exhibit 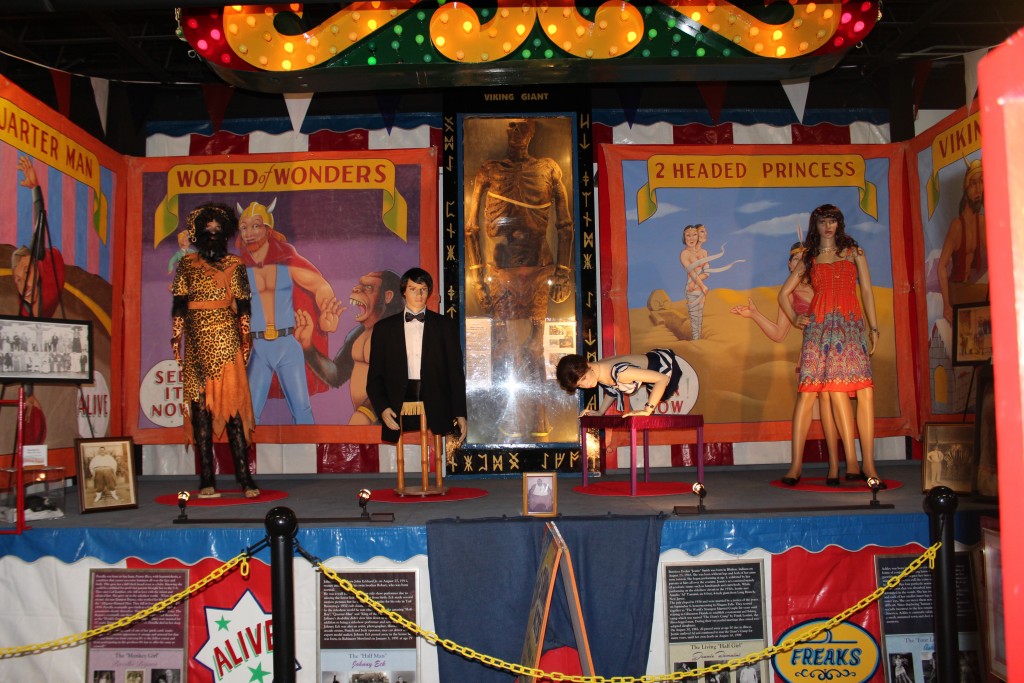 Wikipedia describes a ‘sideshow’ as “an extra, secondary production associated with a circus, carnival, fair, or other such attractions.” Most people commonly think of a sideshow as a show traveling with a circus or carnival, in a tent with human oddities or “freaks”. But any individual show offering something different from the main show can be accurately referred to as a sideshow. Tickets on these shows are sold separately from the feature and are considered a “side attraction”, hence the name sideshow.

The Amazing Sideshows can range from the big circus ten in ones that have 10 individual human oddity acts for the price of a single admission, to girl shows that feature scantily clad ladies in costumes. Often a sideshow can spotlight a single feature such as a giant rat, historical automobile or human deformity. These small tented shows are known in carnival and circus parlance as “single O’s”

There is no real recorded history of the first sideshow in America. P.T.Barnum started promoting the human novelties he called “freaks” in his traveling show in 1835 and he opened his larger freak show at the American Museum in Manhattan in 1841. When a fire in 1868 destroying his museum, Barnum founded P.T. Barnum’s Grand Traveling Museum, Menagerie, Caravan, and Circus. From the Fiji Mermaid, General Tom Thumb and George Washington’s nurse to Siamese twins Chang and Eng Bunker, Barnum presented intriguing individuals with unique bodies and minds as wild and exotic marvels.

Throughout all of these changes, one thing remained consistent, the presentation of human and other oddities or freaks in the form of the amazing sideshows.  During the Golden Age of circuses, every circus carried a big sideshow which was strategically placed by the front entrance of the Big Top. The crowds were extolled by high pressure “talkers” on the “bally” who exhibited a peek to the curious gawkers at one of the acts promised by the large, colorful banners fluttering in the breeze that depicted a stylized version of the performer. The amazing sideshows usually started selling tickets for their continuous performances at least an hour before the main show started, giving everyone a chance to view the complete show in its entirety.

The Single O’s were sometimes referred to as ‘Grind Shows’. They were small, usually independently owned and often carried only a couple of banners promoting their single attraction. They usually offered no bally or professional talker and depended on a continuous, looping magnetic grind tape featuring an individual elaborately describing the presentation featured inside the small tent.

Another small type of show was often referred to as a “Ding Show”. These were often mechanical shows that featured a miniature “Model City” that operated mechanically with moving automobiles and lit street lamps surrounded by scale model buildings that were built to great detail. One of these Ding Shows that was around for decades featured an actual giant redwood log that had been hollowed out as a fully functioning home and moved on a large trailer. Another featured a ten-ton frozen sperm whale in a specially constructed semi-trailer. As the patron exited the show, they were encouraged by a person sitting at the door next to a large “Donation” sign with a small, metal change bucket which he noisily shook at the customer to entice their money.

Illusion shows were sideshows that offered everything from “Spidora” the human spider and “Sheena” the beautiful girl that morphed into an eight hundred pound, raging gorilla right before your eyes to a decapitated woman who’s still functioning head actually carried on a conversation with amazed onlookers.

Girl shows, from elaborate revues with beautiful showgirls performing in sequined costumes accompanied by multi-piece orchestras to single-o cootch shows with aged, over the hill women in faded g strings dancing to scratchy records were also considered sideshows. In fact, there have been about as many sideshow attractions as there have been imaginative ideas representing them.

In the early days of carnival business sideshows featured a representation of a volcano, a scenic train ride through the Rocky Mountains and even a living woman turned into stone as you watched.

As the population became more sophisticated and enlightened through their exposure to television, computers and I phones, they lost their taste for this kind of entertainment. Today almost no sideshows exist and those that still operate, do so with limiting restrictions as societal novelties.