You are here: Home / EXHIBITS / The History of The Girl Show 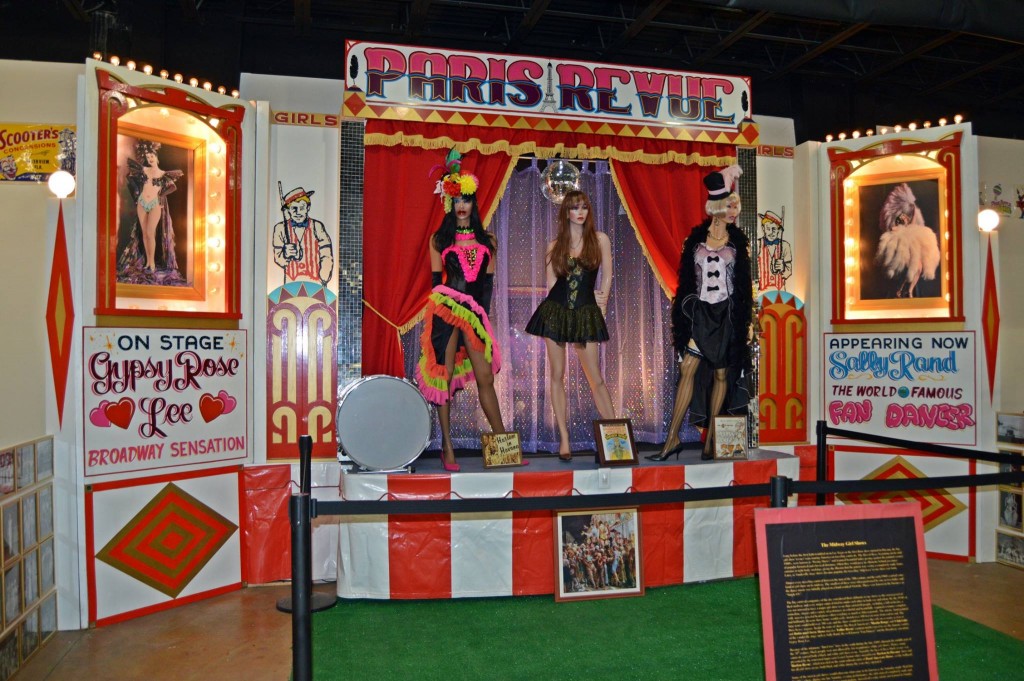 The History of the Girl Show began long before the first light twinkled on in Las Vegas or the first floor show opened in Havana. The big girl show ‘revues’ were touring America on traveling carnivals. The first of these, beginning in the mid 1800’s, were known as “Posing Shows” and featured beautiful ladies posing against the painted scenery of popular historical and classical dioramas. Often they would pose in silhouette behind gossamer curtains in tight body stockings giving the illusion that the patron was seeing a completely nude figure. Later, as Vaudeville stage shows became popular, the traveling ‘striptease’ revue show was born.

Almost every traveling carnival between the turn of the 20th century and the early1960’s carried some kind of girl show on its midway. The smallest of these were often performed by one or two ladies and the dance music was initially played on a hand-cranked Victrola. These were known in the business as “Single-O’s”.

The big carnival companies of the day considered their elaborate revue shows as the crown jewel of their midway and every major carnival tried to outdo each other in both size and talent. By the 1930’s it was not unusual to have a major girl show revue that carried 60 people, including a full orchestra, a comedian, singers and a variety of performers in colorful and beautifully sequined costumes complete with massive jeweled headpieces often weighing as much as fifteen pounds.

The artistic, hand painted and brilliantly lit neon show fronts would easily stretch over 100 feet or more from end to end. The large tents could hold over 200 seats and the show would travel over the rails on as many as two or three heavy wagons. Inside the tents of shows like Royal American Shows’ “Moulin Rouge” and “Club Lido”,  Rubin & Cherry’s massive “Follies Revue” a patron might expect to see the famous starlets of the vaudeville stage such as Sally Rand, the well known “Fan Dancer” and the Broadway sensation, Gypsy Rose Lee.

Because of the infamous “Jim Crow” laws in the south during the late 1800’s through the middle part of the 20th century, black people were not allowed by law to patronize white girl shows. Hence, many carnivals carried both a black and white girl show revue. Arguably the best of these black revues was presented by the renowned impresario Leon Claxton who’s magnificent ‘Harlem In Havana‘ show and ‘Harlem Revue‘, which traveled on the giant railroad carnival Royal American Shows, set the hallmark for all girl show revues both black and white during the years they operated.

Some of the raciest girl shows would often run what came to be known as the Saturday night “Red Hot Ramble” where, during one late Saturday evening performance, the girls danced completely nude and, often combining their act with audience participation, showed off exotic talents not learned in Sunday School.

Today, although you can still see elaborate, costumed floor show production numbers in big Las Vegas-style casinos, none of these beautiful traveling carnival revue shows still exist. The cost of producing and transporting such a spectacle across the country has become far beyond reach and a much more relaxed attitude at the local level concerning “Gentleman’s Clubs” and topless bars, combined with the internet and cable television which have left nothing to the imagination, eventually brought them to their final curtain.