You are here: Home / Girl Show Revues / The Famous Moulin Rouge Carries On

Spectacular shows that features talented performers on the carnival midway. 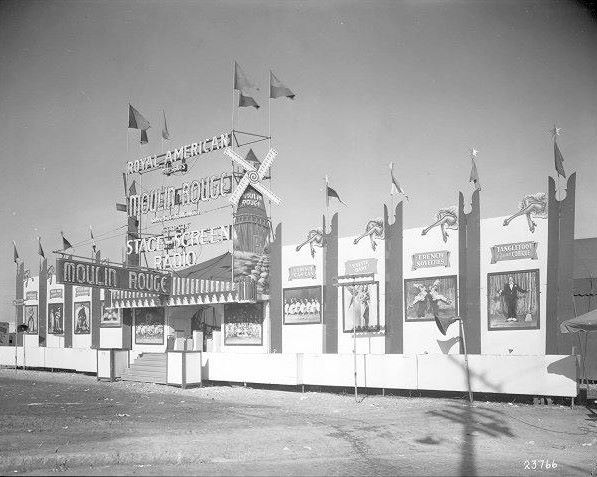 In the 1940’s the great Royal American Shows offered the Moulin Rouge, their outstanding girl show revue as one of the premiere attraction of their midway.

It was a beautiful and spectacular show that featured the best and most talented performers of the day. The massive, artistically created front was, as fronts on the big backend shows tended to be in those days, spectacular.

In the thirties the smaller girl shows were seen on the midways and they became bolder to whatever extent the law allowed.

In the late 40s, early 50’s there were over 100 girl shows in the carnival industry. Some fairs that had an arrangement where there would be as many as eight or more girl shows lined up one after another.

Assisting in the girl shows decline also were the local girl clubs springing up in hundreds of towns. By the late 1970s it was about all over.
Sadly, it, like the other big girl show revue fronts are a thing of the past…BUT….wait,… what have we here?! 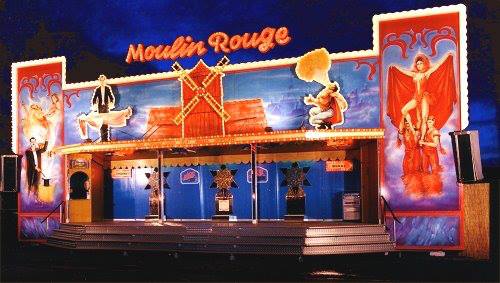 This beautiful front bearing the legendary name of the Moulin Rouge does justice to the tradition of the big fronts in spectacular fashion.

We wish this beautiful new show and all those connected with it much success and applaud the efforts of those who made it look so magnificent. This is an example of the future history of our business being created as we stand before it.