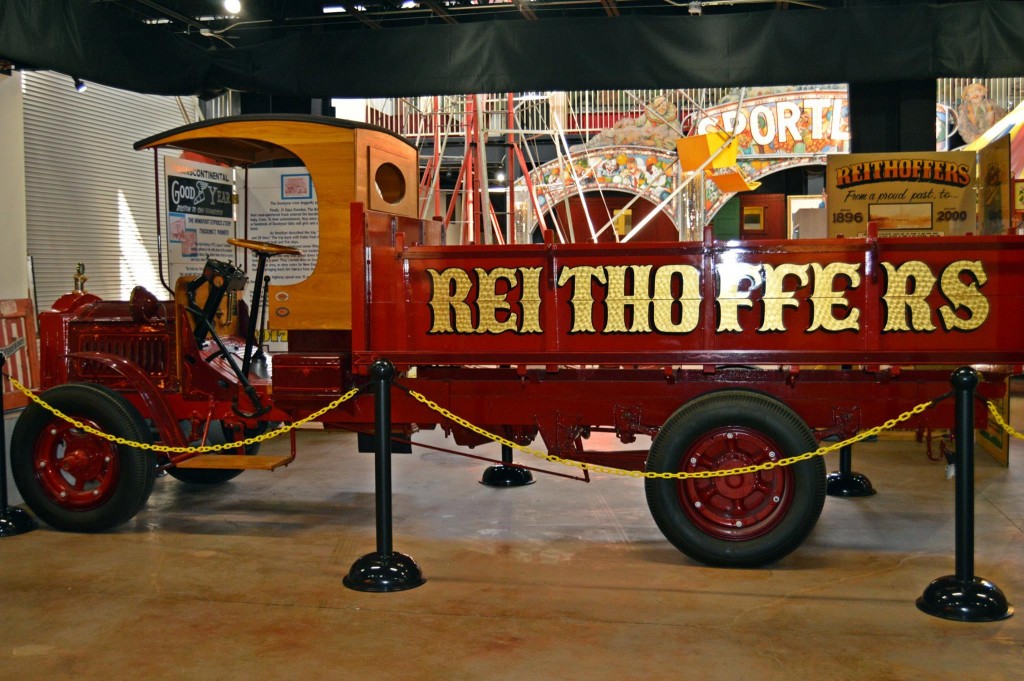 Julius Reithoffer, emigrated from Germany in the mid 1800’s and settled in Duryea, Pennsylvania, opening a general store. He eventually saved up enough money running that little store to be able to purchase his first ride, a steam driven carousel, in 1896. The steam driven carousel turned out to be a great investment which led to the purchase of a feris wheel and the rest as they say is history.

There came a point when Julius and his family had to take a leap of faith. So they decided to sell the general store, use the money to reinvest in the show and head out on the road. What would they do for a living when they had to be gone all summer to run the show? Well, become schoolteachers, what else? So they taught school and when summer rolled around it was time to head out on the road.

At first only the railroad was able to haul a carnival from one location to another. But soon, the Packard Company started producing the world’s first large trucks; right about the same time a company by the name of Goodyear invented the pneumatic tire.

With these two inventions and Reithoffer Shows 1918 Packard Truck, Patrick Edward Reithoffer Sr. was able to take the show off the rails and to every small city on the east coast.

Remember back then there was no DOT or regulations so trucks were loaded 12 feet wide and 18 feet tall  – whatever was needed to move the equipment. The trucks back then traveled about 15 miles per hour tops and were as heavy as 10 tons. Going up a mountain was a real slow process.  Going down a standard size mountain was done by cutting down a large tree chaining it on behind the truck and that was used as the brakes. The roads were dirt or gravel and not the highways we know today.  In order to make better time, when going down hills that had no turn it was common practice to take the truck out of gear and coast with the open cab and no doors which gave you great acceleration.

Reithoffer Shows built the first motorhome. They were called housetrucks. Carnival people lived and toured the country in them. The housetrucks were the forerunner of the modern motorhome

Reithoffer Shows put the carnivals in the people’s backyards with the packer trucks because they could carry the heavy loads everywhere and were not limited to railroad. 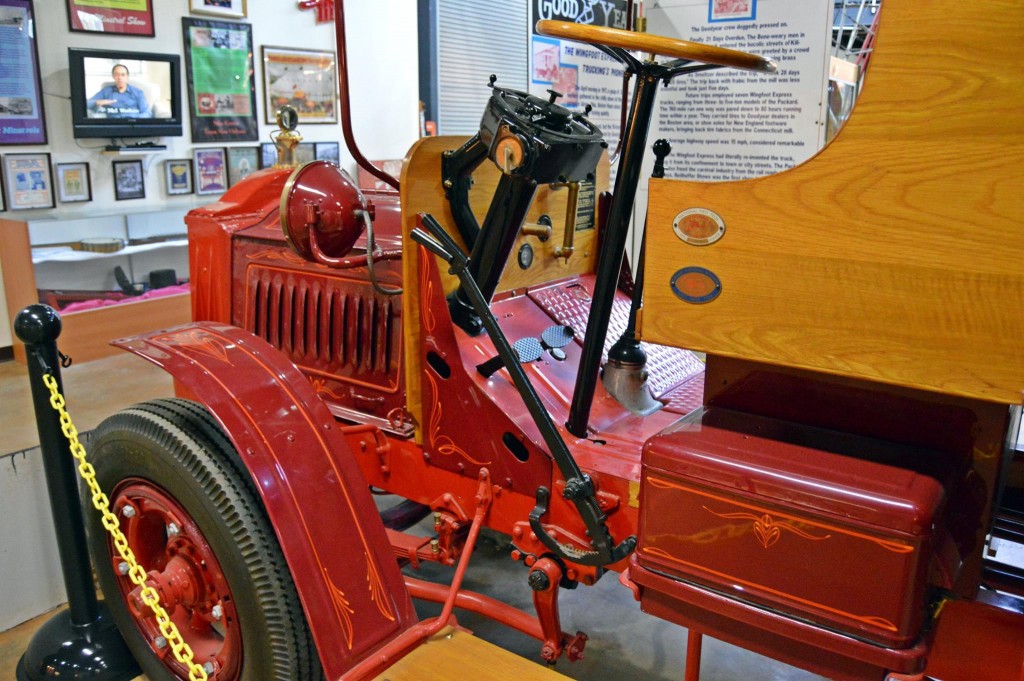 In the beginning only horse drawn wagon could move produce from farms and manufacturing plants.  Products had to be loaded into rail cars and delivered to stations across the USA. All towns, however, did not have stations, so shipments were limited to railroad and horse drawn wagons.  Factories were built along railroad sites and had citing built to their doors. The railroads opened up the country.  Then the Ford Model T put America on wheels.

Goodyear first introduced the Packard in 1917 when the first Wingfoot Express Truck was created to haul cross-country. Once known as the “Goodyear land blimp,” the 5-ton, 10-foot-high truck had the first sleeper cab in the trucking industry.

But the real innovation was that it ran on pneumatic tires. Most trucks of the time ran on solid rubber tires and avoided carrying anything fragile because of the jolt rubber tires gave the chassis of the truck, but the air-filled tires on the Packard provided a smoother, revolutionary ride for truck drivers.

Goodyear plant manager Paul Litchfield was convinced that pneumatic tires would serve trucks better than all-rubber tires, but he had a difficult time convincing truck operators and manufacturers.

To prove his logic, Goodyear assembled a three-vehicle caravan to travel from the Akron, Ohio, tire factory to the company’s tire fabric mill in Connecticut, a 740-mile trip that took 28 days and cost loads of tires and equipment.

But within a year, the crew members reduced the trip to 80 hours, and the Wingfoot truck continued to make trips between the Akron factory and New England cities.

The 1917 Packard set a transcontinental record in 1918, making a trip from Boston to San Francisco in 13 days and five hours, over forests and rough terrain. The trucks became so reliable that in 1918 seven Wingfoot Express trucks carrying a group of Boy Scouts, made a 3,000-mile trip down the East Coast without a single blown tire.

Goodyear first restored the 1917 Packard Model Ei n 1983 after rescuing it from a northern Minnesota swamp where it had been for 40 years and restored it to original condition..

Investigation proved it to be a 1917 Series II 3 ton model. The exact model Goodyear purchased in the spring of 1917 to prove it’s case for over the road hauling on pneumatic truck tires.

Research through the Minneapolis Public Library explained the mysterious brass plate still mounted on the rotted – Ford it read,  Stone  Ordean Well Company.” This was the name of a Minneapolis distribution company long since out of business. They had use th 1917 Packard until 1933 to deliver cigars, coffee, and candy to area merchants.

Well the trucks body was missing, lots of parts but the drivetrain appeared to be complete but actual condition would be known only after being torn down. The 1917 Packard was freed from the frozen ground in early 1983 and hauled to Hartville Ohio, for a total restoration. While a master mechanic and antique car expert pursued the project, research was done on the design of the replica Goodyear Wingfoot Express truck body.

Rare photos in the Goodyear archives since 1917 were used and as a result, plans for the white oak body were developed. Meanwhile a car hobbyist on Goodyear staff began the hunt for long missing parts. Authentic head lamps were found in Chicago, tires in an Arizona fire engine museum, a brass searchlight in Florida, and the priceless rear gear missing from the differential unit in a barn in Pennsylvania. After 8 months of work and research the recreated Goodyear Wingfoot Express and trucking pioneer is on the road again. What was the most novel about Goodyear’s truck name the Wingfoot Express was the big  pneumatic tires it rolled on are hard solid rubber tires and were standard equipment for short hauls in those days.

Throughout the 1980s and 1990s, the Packard was used as a public relations vehicle for tire center openings and tire shows. In the late 1990s, the old truck was parked at a tire testing facility in San Angelo, Texas, and lay dormant for a long time, except for a short display in the National Packard Museum in Warren, Ohio.

It may be going on 100 years old, but this 1917 Packard Model E, one of the first commercial big rigs, isn’t ready to give up the road yet.