The History of Candy Apples

Candy Apples Are A Must At The Fair Even Today . . . 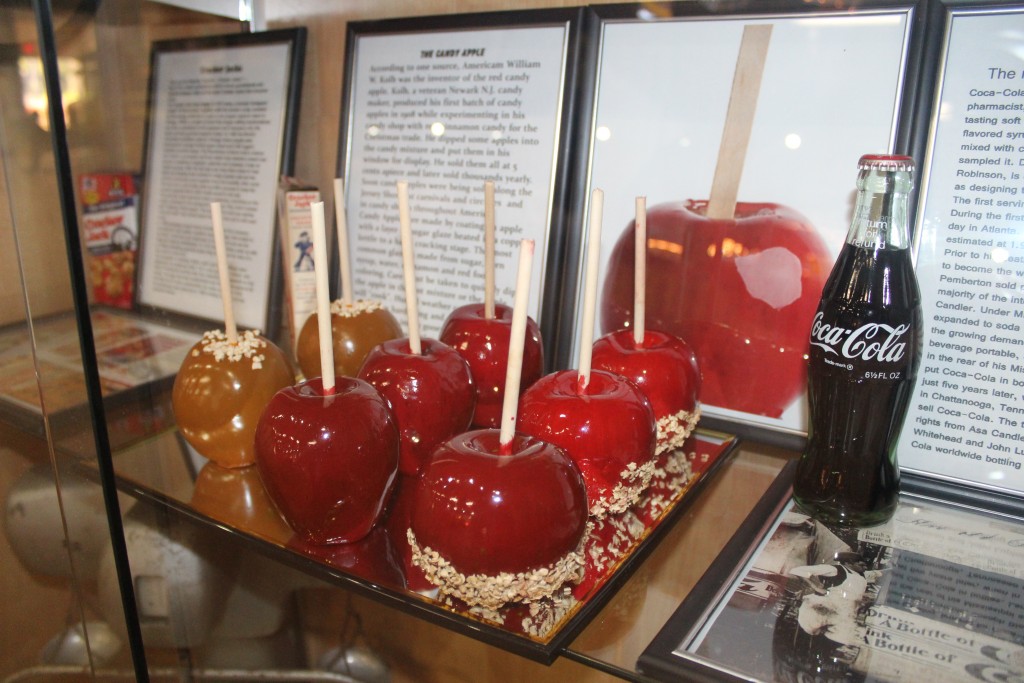 According to one source, American William W. Kolb invented the red candy apple. Kolb, a veteran Newark candy-maker, produced his first batch of candied apples in 1908.

While experimenting in his candy shop with red cinnamon candy for the Christmas trade, he dipped some apples into the mixture and put them in the windows for display.

He sold the whole first batch for 5 cents each and later sold thousands yearly. We’re sure you can guess what happened next. Candy Apples became the next sugary craze. Kolb increased production to accommodate thousands of customers.

Soon candied apples were being sold along the Jersey Shore, at the circus and in candy shops across the country, according to the Newark News in 1948.

Candy apples are made by coating an apple with a layer of sugar glaze heated in a copper kettle to hard cracking stage. The most common sugar coating is made from sugar, corn syrup, water, cinnamon and red food coloring.

Humid weather can prevent the sugar from hardening.

1.  Candy apples are mistakenly called by many names.

The sugar coated apple treat we call a candy apple is generally called a toffee apple outside the U.S. and Canada.  Many people call them caramel apples, using candy and caramel interchangeably.  However, there is a difference between a candy apple, a caramel apple, a jelly apple, and a toffee apple.  The difference is usually in what the coating is made from and how it is applied to the apple.

Attributed to William Kolb of Newark, the first candy apple was created in 1908.  Although some believe the tradition came from the technique used in Arabian households and markets to candy fruit as a way to preserve it.

3.   The first candy apple was meant for display only.

The candy apple was created quite by accident.  Kolb the candy maker was looking for ways to expand sales of his red cinnamon candy during the Christmas season and used an apple on a stick as a way to display the brightly colored candy in the shop window.  It didn’t take long for the new treat to take off and soon he was selling thousands of them each year.

4.  Candy apples are easiest to make in the fall.

It’s not just because of the plentiful apple harvest.  A proper candy apple requires a hard sugar layer that doesn’t always set properly in hot or humid weather.

Today, you can find a variety of different flavors coating the candy apples at the fair or the festival.  But a true candy apple has a hard sugar coating colored red and tasting of cinnamon.  This is one of the reasons candy apples and caramel apples are actually different treats.

6.   Candy apples used to be given out for trick-or-treat.

In the first half of the 20thcentury, giving candy apples out for trick-or-treating was very popular.  However, scares about razor blades and other dangerous items in the apples during the 1970’s brought a quick end to this tradition.

7.  Outside the U.S., candy apples sweeten holidays around the world.

From China to Ireland and Brazil to Germany, local versions of the candied apple are eaten during the celebration of a number of holidays beginning around Halloween and reaching all the way to Christmas.

8.   When it comes to candy apples, only some apples will do.

The most common varieties of apple used to create these treats are Fuji and Granny Smith which work best for two reasons.  First, the tart flavor is a better contrast to the sweet candy coating.  Second, crisp apples like these hold up better under the heat and weight of the candy coating.

9.   They may be healthier than you think.

An average home-made candy apple generally ranges from 215 to 286 calories and contains 0 to 3 grams of fat.  Of course, these figures are entirely dependent on what you use to make the candy coating.

10.   You probably own something that got its color from the candy apple.

That first red cinnamon coated apple in Kolb’s display window created more than just a sweet treat, it also created a racy color that would become synonymous with fast cars and flirty girls.  Since the 1950’s people have been painting their nails, their guitars, their motorcycle helmets, and their cars candy apple red.