You are here: Home / Thrill Shows / Wall of Death

Wall Of Death Is A Crowd Pleaser on Carnival Midways 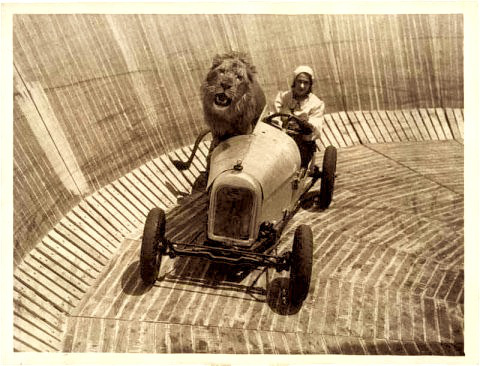 The Motordrome or “Wall Of Death” was one of the most popular shows on the midway and every carnival of any size carried one.

Born from board track racing and velodromes (a popular sport featuring motorcycles racing on a wooded track) as well as early bicycle stunt racing (also done on a wooden track), the “Wall of Death” is a wildly popular carnival attraction that made its first carney appearance in 1911 at New York’s Coney Island.
These thrilling shows featured daredevil motorcycle riders.  The Wall Of Death also featured specially built midget hot rod cars scaling the circular, straight up and down board walls of the Silo Dromes as they were known.

In the early 1900’s the preferred motorcycle used in these shows was the dependable Indian Scout, several other makes and models were also used over the years with equal success. 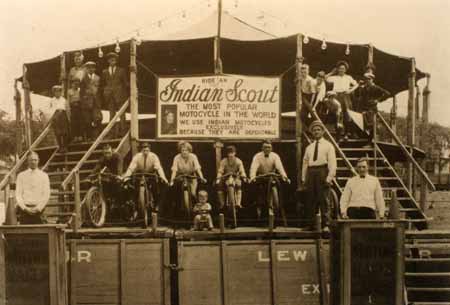 Even lions rode the Wall Of Death. Some of the earliest motordromes, such as Fearless Eggbert’s and later Ethyl Purtle and Joe Pelaquin’s, were known as Lion Dromes and actually incorporated live lions in their performances.

The first female rider was the beautiful Lillian LaFrance who owned her own Motordrome and whose daring exploits from the 1920’s performing on the wall of death, were legendary, cheating death and encountering serious injuries several times over her 20 + year career. She said: “It was the thrill of risking my life that made me take to drome riding.  I was the girl who flirts with death.  From childhood, I was inspired by wanderlust.  I was always alone, dreaming of adventures– how to ride a pony out West, to follow my calling to fame.  This was my secret.   I shared it with no one”

Lillian LaFrance, female daredevil and stunt rider born Agnes Micek in 1894, she was was the second of nine girls growing up in a strict Catholic family in Kansas. She always dreamed of adventures and searching out her call for fame. Around the age of 22, she renamed herself Lillian LaFrance and literally ran off with a traveling carnival. In the next eight years, her travels eventually led her to begin riding the motordrome at the age of 30.