You are here: Home / Carnival Rides / The Original Ferris Wheels

Portable Ferris Wheels Are Invented For The Carnival Midway 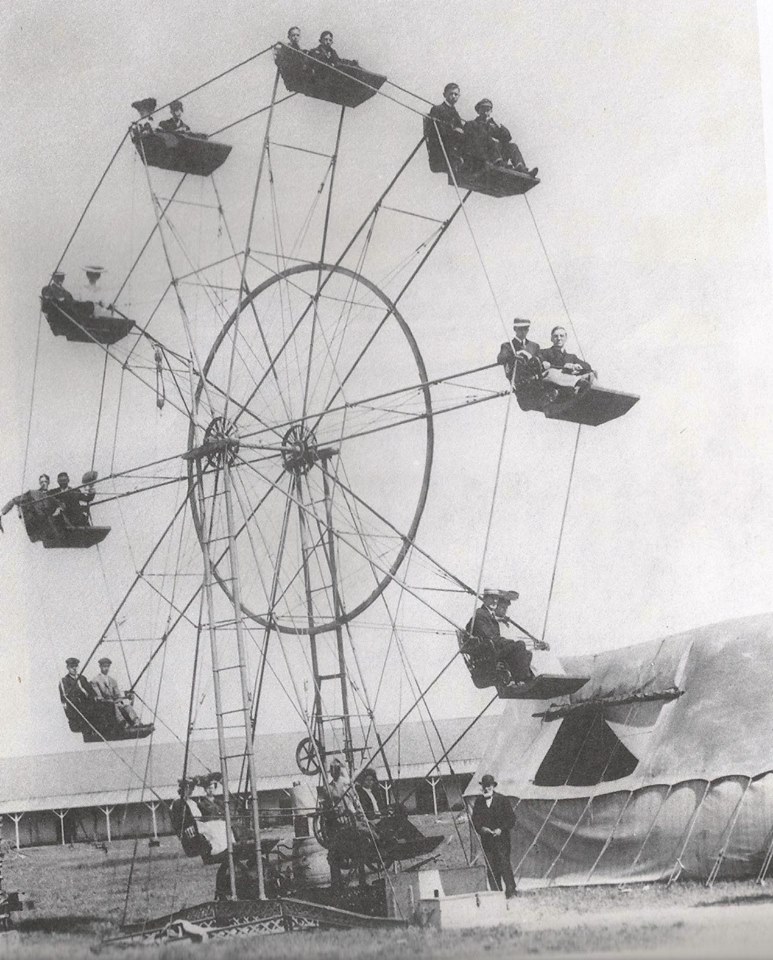 This Conderman Ferris Wheel Is On Exhibit At The Museum

The original Ferris Wheel was designed and constructed by George Washington Gale Ferris, Jr. as a landmark for the 1893 World’s Columbian Exposition in Chicago.

With a height of 264 ft. it was the largest attraction when it opened to the public on June 21, 1893.The wheel rotated on a 71-ton, 45.5-foot axle comprising what was at that time the world’s largest hollow forging, manufactured in Pittsburgh by the Bethlehem Iron Company and weighing 89,320 pounds, together with two 16-foot-diameter (4.9 m) cast-iron spiders weighing 53,031 pounds.

There were 36 cars, each fitted with 40 revolving cupolas (the size of a bus) and able to accommodate up to 60 people, giving a total capacity of 2,160 passengers.The wheel carried some 38,000 passengers daily and took 20 minutes to complete two revolutions, the first involving six stops to allow passengers to exit and enter and the second a nine-minute non-stop rotation, for which the ticket holder paid 50 cents.

The Exposition ended in October 1893, and the wheel closed in April 1894 and was dismantled and stored until the following year. It was then rebuilt on Chicago’s North Side, near Lincoln Park, next to an exclusive neighborhood. This prompted William D. Boyce, then a local resident, to file a Circuit Court action against the owners of the wheel to have it removed, but without success. It operated there from October 1895 until 1903, when it was again dismantled, then transported by rail to St. Louis for the 1904 World’s Fair and finally destroyed by controlled demolition using dynamite on May 11, 1906.

The Columbian Exposition was the beginning of the golden age of carnival business and it wasn’t long after this celebration was over that homemade ‘Ferris Wheels’ began appearing on the scene in scaled down versions. As bonafide carnival companies became a new force, the market was created for a durable riding device that offered portability and safety.

In 1899 Jay Conderman advertised in the Billboard trade paper that his wheel was the largest on the road ( 40 ft.) and featured electric lighting and upholstered seats for the total price of $1,000.00. On Sept. 4th 1900 he filed a patent (# 699621) for his “Pleasure Wheel” in his wife’s name. Litigation was filed with Newton M. Johnson and William E. Sullivan of the Eli Bridge company who were both working on marketing their own models. The conclusion, after much court wrangling, was that you could patent a part on the ride (such as a seat or spoke design) but you couldn’t patent the basic idea of the ride. The Conderman factory was located in Hornesville, N.Y. and operated for a little more than 12 years from 1898 to 1910, when it was destroyed by fire. Jay Conderman later moved to Chicago and became a successful real estate broker.

Meanwhile in 1900, William E. Sullivan and J. H. Clements constructed a 45 ft cable driven 12 seat device on the back lot of the Eli Bridge Company. It was an instant success and took in $5.50 on its first day. The first wheels were powered by a 6 h.p. Semi portable Huber steam engine and came in two sizes; a 45 foot “No.5” for the road and the larger 50 foot model “No.12 designed for parks. These were followed by a 55 foot No.16 known as the “Aristocrat” which became popular in the amusement park industry at the time . 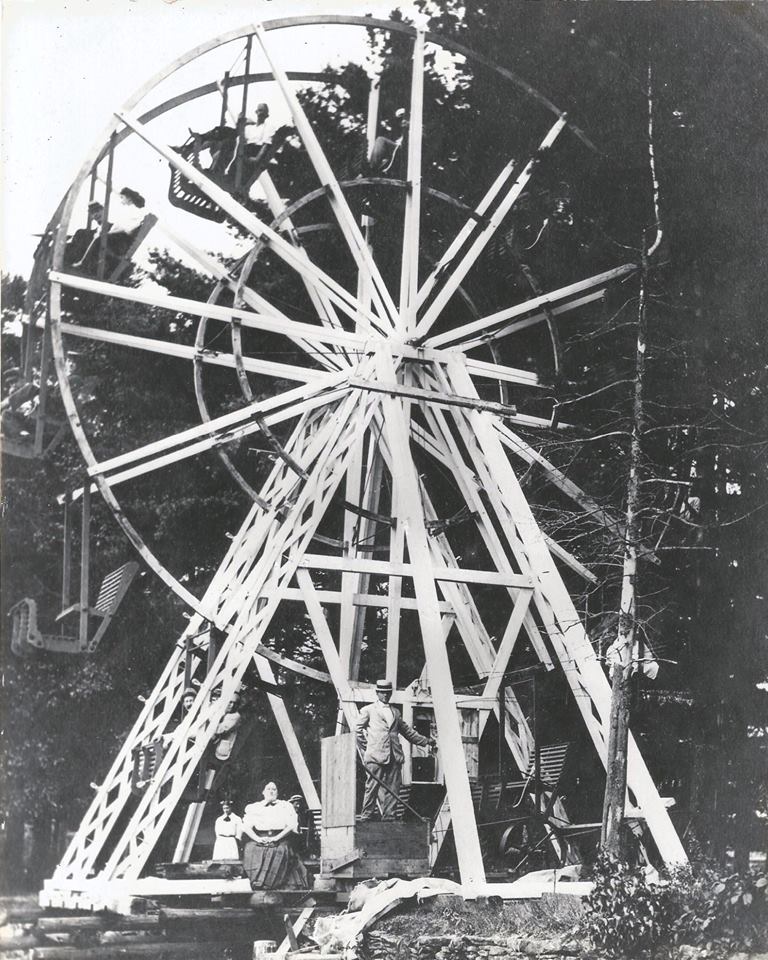 An example of an early “homemade” Ferris Wheel”

Though the old steam engines have long since been retired, except for a few incidental changes, the venerable No.5 design remains pretty much the same as it was first conceived, today and is built by the same company. Records of these wheels have been meticulously kept by the company on each ride sale and resale. The wheels have been stamped and numbered on the builders plate and on the hubs starting with Sullivan’s first wheel. For example, number 720-41 indicates it was the 720th wheel built in 1941.

Strong, modern building materials in today’s design allow the portability of Ferris Wheels well over 100 feet that easily setup and teardown in a few hours. Their solid state electronic lighting systems are a dazzling show in itself. By comparison to the enormous mega thrill rides of today they seem quite timid. But every child gets the same thrilling, hollow feeling in the pit of their stomach when their seat breaks over the top for the very first time and even today, no midway is considered complete without one.

Many inventors tried their hand at building Ferris Wheels. The picture above is an example of one of these structures made completely of wood.