You are here: Home / ABOUT / Museum Curator

Doc Rivera and his family settled in Gibsonton, Florida where he operated a sign and art paint shop that focused primarily on circus and carnival artistry. He was a well-known show painter and scenic artist there for more than twenty years during the winter months. You can see some of his artwork on display in the Showmen’s Museum.

He is a member of the Gibsonton Showman’s Club and a past Master of his Masonic Lodge (Desoto 105 F & A.M.) as well as a Shriner.

David “Doc” Rivera serves as both curator and executive director at the Showmen’s Museum. As historian for outdoor traveling shows that encompass Carnivals, Wild West Shows, Sideshows, Music Shows, Rides, and games to name a few, he shares his expertise and stories from the rich and colorful history of carnivals, sideshows, trains, carnival equipment from the past.

Doc has painted a series of oil paintings of the bygone era of the traveling shows of the past. He has written a book ( The Last Showtrain) soon to be published and works on personal projects such as documenting the carnivals, circuses, showmen, and individuals who carved out their own piece of showmen history.

The series of paintings are currently on display at the Showmen’s Museum. 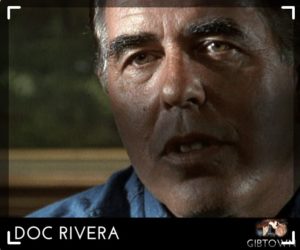 Currently, he spends his time documenting traveling show history at his website: Doc’s Midway Cookhouse.  He is considered by many to be a knowledgeable carnival and circus historian and was showcased in the acclaimed documentary ‘Gibtown” and numerous interviews, tv shows such as CBS Morning Show, American Pickers Episodes,  books, magazines, articles, and publications.

He will be happy to show you around the museum and share his knowledge about the show business he loves so much. You have got to join in one of his group tours!