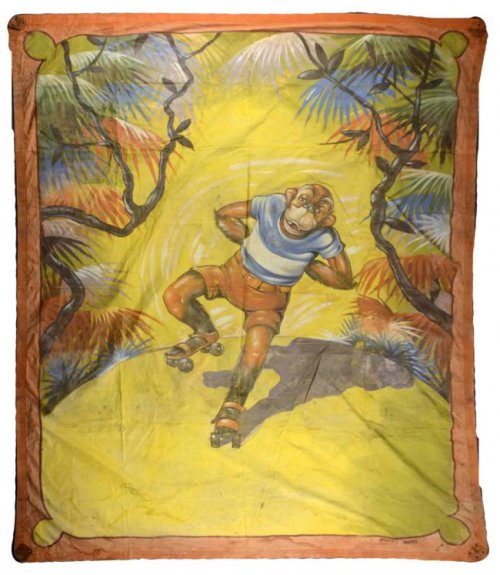 Sideshow banner painter Bobby Wicks (named Robert Ferraiolo Wicks) was born in Brooklyn, NY on April 30, 1902, to Italian parents. After finishing elementary school he drifted to Coney Island and started painting shooting galleries with John and Frank McCullough. In these early years,  Bobby Wicks made a name for himself working with several banner painters.

He was a talented banner and show painter and tattooist greatly admired by his fellow artists. Wicks once told a reporter that he got his start as a boy painting signs that said: “Frankfurters 5¢” for Coney Island hot dog stands. Though both his paintings and tattoo flash are hard to come by, a delightful rollerskating monkey banner that he did for a carnival’s monkey speedway will be on the block at Morphy Auctions on Sunday.

The 9-1/2 foot tall by 7-1/2 foot wide banner above was part of a banner line designed to draw people over to a midway attraction that remained popular through the 1950s and ’60s. The banner painters often portrayed the monkeys in a variety of eye-catching scenarios, from walking a tightrope to dining in a fine restaurant, that were not part of the show.

Bobby Wicks started tattooing in Coney Island in 1916 or 1917.  Within a year Wicks was teamed with Burt Thompson, a balloon jumper, and tattoo artist. Thompson’s tattoo studio was a good-size cabin cruiser and he worked the waterfronts of coastal towns. After working several weeks with Thompson near Chatham Square, Wicks was sent for by Charlie Wagner and spent the next five years working at Wagner’s #11 Chatham Square shop. That shop was described by Wicks as a 5×8 corner in a barber shop rented from Louis Alteresi, who owned the barbershop and was also a bail bondsman. One of Wicks most famous tattoos was the “Ecce Homo” Christ head with a crown of thorns that he tattooed on the head of fellow tattooist Jack Redcloud.

By this time Bobby Wicks was better known in the tattoo and show business world as “Texas” Bobby Wicks. It is a mystery how he got the “Texas” nickname because it was said that he was never west of Ohio. While at #11 Chatham Square, Wicks and Wagner tattooed each other and by the age of 19, Bobby Wicks was billed as America’s youngest tattooer.

Wicks spent at least one season with the Dobyns & Bergen Show in 1921 working as a tattoo artist attraction.

After leaving Wagner’s shop Wicks operated two other shops in New York City; one at #152 Canal Street and another at #9 Chatham Square where he was located in the back room of a barber shop and worked with Andy Sturtz.

With the stock market crash in 1929 and the start of the depression, Bobby Wicks quit tattooing and turned back to his first love – banner and show painting. 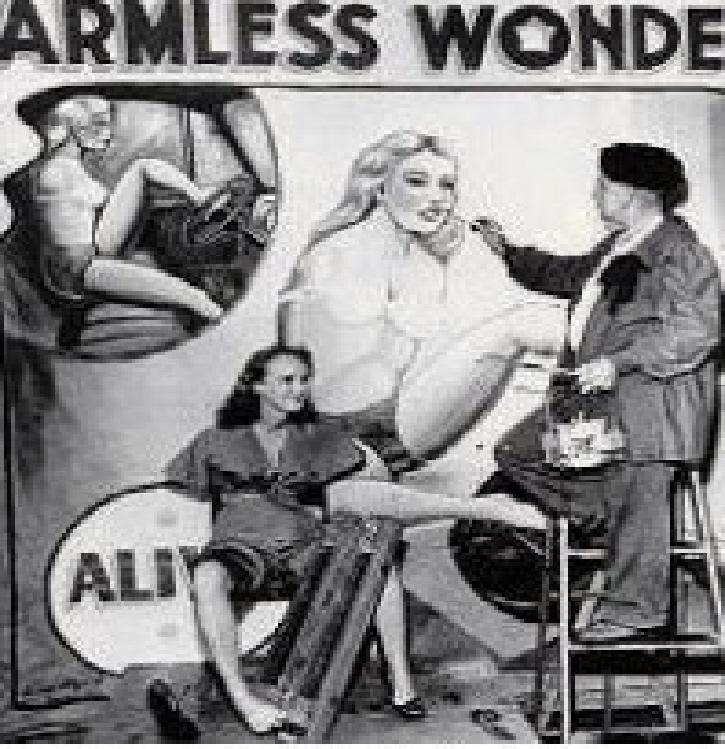 During this time Wicks designed a crest for the show that was used on employees’ uniforms, tickets boxes, wagons, and trucks.

Bobby Wicks retired from banner painting around 1972, but continued easel painting and occasional show fronts. He said, “My easel paintings yield a better income by far, and there is no deadline as with banners”.

Very little of Bobby Wicks tattoo flash have survived however in viewing those surviving sheets, it’s clear that he was one of the great flash painters – tattooists of his era. Perhaps of any era.