The Pagentry of The Wild West Shows

In 1887 Cody responded to a request by Queen Victoria to appear at her Golden Jubilee at Windsor Castle by taking the entire troop overseas on several ships, including 200 passengers, 97 Native Americans, 18 buffalo, 181 horses, 10 elk, 4 donkeys, 5 longhorns (Texas steers), 2 deer, 10 mules, and the deadwood concord stagecoach.

The Show toured England for the next six months, and then the following year returned to tour Europe until 1892, and again in 1906. By taking his Show overseas, Buffalo Bill spread the myth of the American West to people whose frontier has been settled centuries before, and who were hungry for the exciting adventure of the American West.

To some Europeans, the Wild West show not only represented the west, but all of America, and it likely influenced the decision of many to immigrate to the United States.

Buffalo Bill also created the cowboy as an American icon. He gave the people of England, France, Spain, Italy, Belgium, Netherlands, and Germany a taste of the wild and romantic west.

In 1893 the show performed at the Chicago World’s Fair to a crowd of 18,000. This performance represented the peak of the show’s popularity. Thereafter, it saw a steady decline. A series of unfortunate business decisions and the poor economic climate of the country, as well as the invention of the motion picture contributed to the show’s end.

In 1913 Cody was bankrupt and took down his tents for the last time. Nevertheless, the impact of Wild West Shows on the creation of a mythic past for the United States can hardly be overestimated. Not only did it serve to mythologize America’s past, but it forever identified the Plains Indian and his lifestyle as the Indian, and fixed the Euro-American image of the Indian in time. By the late Nineteenth Century, Euro-Americans were well on their way to identifying the Indian as a people of the past. 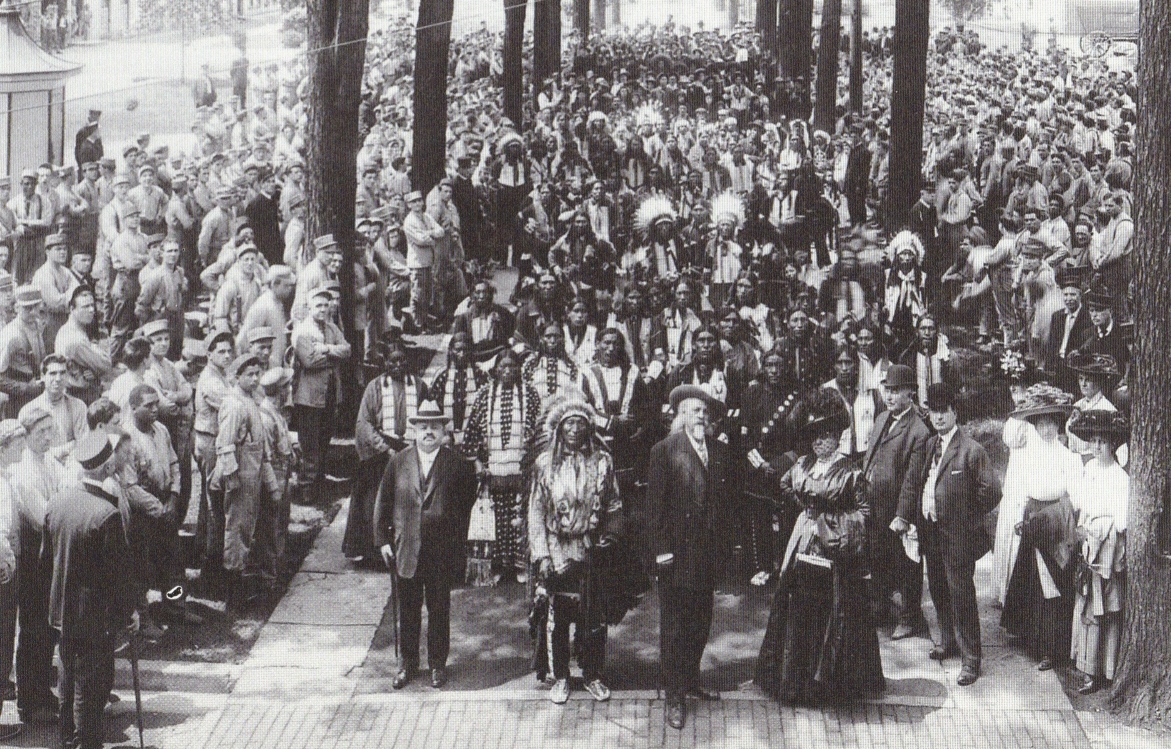 In the annals of this variety of entertainment, Oklahoma’s Wild West shows occupied a distinctive niche because they reflected a dualism that marked the history and aspirations of the state. Wild West showmen celebrated Oklahoma’s colorful western heritage, while promoting the state as business-oriented, progressive, and led by successful rancher-businessmen. 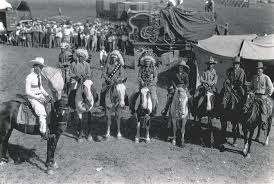 In the late nineteenth and early twentieth centuries when Wild West shows flourished, most Americans thought of Oklahoma as the Wild West because it had been Indian Territory and encroachment there by miners and cattlemen had precipitated conflicts between American Indians and the intruders. Then came the frenzied 1889 land rush into Oklahoma Territory. Oklahomans took pride in their roughhewn past, but they also sought acceptance as a settled part of the United States, deserving respect from the business community and the rest of the nation.

Gordon W. Lillie, popularly known as Pawnee Bill, pioneered the role of Oklahoma’s Wild West showmen. He presented himself as proud Oklahoman, friend of the Indians, adventurer, rancher, and businessman. His association with the Pawnees allowed him to recruit Indian performers for Buffalo Bill’s newly formed Wild West show in 1883. Lillie remained involved with other shows until he formed his own in 1888. His

Wild West show connections, the dime novel-sounding moniker “Pawnee Bill,” and his own tales promoting himself as “Boomer” leader, foe of outlaws, and pioneer businessman par excellence added to his persona the images of frontier adventurer and forerunner of civilization.

From 1888 to 1913 Lillie had his own extravaganzas, billed as “Pawnee Bill’s Historic Wild West” and “Pawnee Bill’s Great Far East.” An astute and sometimes sensational showman, he filled his arena with war-painted Indians, daring rescues, horsemanship, and marksmanship, including that of his wife, sharpshooter May Manning Lillie. Annie Oakley joined his troupe for the 1888 season. Like Buffalo Bill, Lillie took his entourage to Europe. Sometimes he prospered, and sometimes he flirted with financial disaster, but he always survived financial crises.

Pawnee Bill and Buffalo Bill combined their shows in 1908 as “Buffalo Bill’s Wild West and Pawnee Bill’s Great Far East,” an arrangement that lasted until 1913.

The next important show to emerge from Oklahoma was created by Joe, George, and Zack Miller of the 101 Ranch, in Kay County. Touring from 1907 to 1916 and 1925 to 1931, the Miller Brothers’ 101 Ranch Wild West show visited England, contingents of it toured Latin America, and 101 performers often traveled with circuses in Europe and Russia.

Modified versions of the 101 show continued to appear until 1949. The Millers emphasized that they and their father, Joseph, had participated in Oklahoma’s tumultuous “Wild West” past as cattle drivers and traders, friends of the Ponca Indians, and ranchers who had established the sprawling 101.

Publicity trumpeted their enthusiasm for Oklahoma and touted the 101 Ranch as the nation’s leader in agribusiness. The Millers stressed that they were businessmen-ranchers, not cowboys, whom they regarded as colorful but less significant than ranchers. Oklahoma newspapers hailed the 101 Ranch Wild West show as Oklahoma’s best publicity organ, and Gov. Charles N. Haskell allowed his son Joe to travel with the troupe and ride in its street parades in 1909. When the 101 Ranch collapsed in theGreat Depression, so did the brothers’ offshoot enterprise. 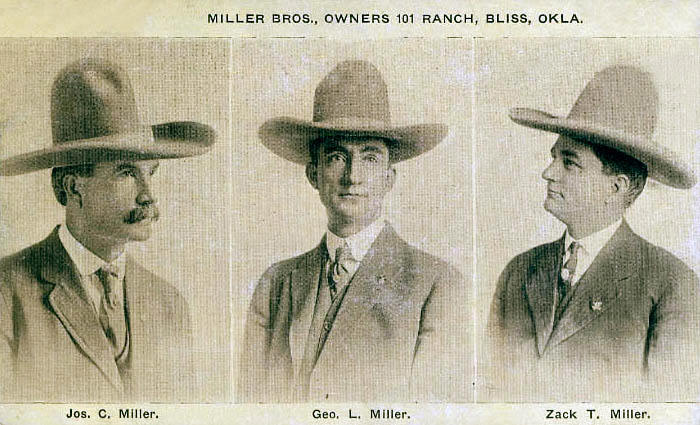 The Millers’ show imaged Oklahoma as a place where adventure, progress, and prosperity mingled comfortably with patriotism and social justice. Apparently even ethnic and gender differences had disappeared there, because the 101 gave top billing to an African American cowboy named Bill Pickett.

The Millers expressed their fondness for the Ponca Indians who lived on the ranch, and in 1913 advertising promoted cowgirls as vigorous and independent women who were treated as equals to cowboys on the 101. Patriotism burgeoned in 1910 when war with Mexico threatened and again in 1916 when Pancho Villa led a raid across the Rio Grande. Those in the 101 show—the Millers, cowboys, and cowgirls—expressed their enthusiasm for becoming citizen-soldiers and defending Oklahoma and the rest of the United States from foreigners.

Oklahoma’s Wild West shows, mostly those of Pawnee Bill and the Millers, and including Col. Zack Mulhall’s Wild West, made people who lived in their state appear to be colorful and likeable characters. Among those promoted as “Oklahomans” were Geronimo, Will Rogers, and Lucille Mulhall, who were, and Tom Mix, Dan Dix, Helen Gibson, Neal Hart, “Buck” Jones, and Mabel Normand, who were not. Even those who ran smaller shows advertised the state by including the word “Oklahoma” in their titles, as evidenced by the names Arlington & Beckman’s Oklahoma Ranch Wild West (1913), Barrett Shows and Oklahoma Bill’s Wild West (1920), and Rhoda Royal 3 Ring Circus combined with Oklahoma Ranch Wild West (1922).