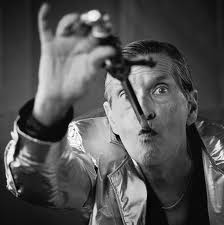 Sideshow banner painter Johnny Meah, was born in 1937 in Bristol, Connecticut, where his father was a newspaper cartoonist. He likes to say he grew up in a black-and-white household, dominated by the pen-and-ink drawing of his father’s. Meah took up drawing early in childhood, but the wider world of color appealed to him: bright railroad cars, colorful circus wagons. At 14 he visited his first carnival. He soon met a man called “The Human Cannonball,” Hugo Zachinni, who was then working for the King Brothers Circus. Zachinni was also a renowned painter of sideshow banners when he wasn’t flying out of a cannon for audiences. After his first circus season, Meah was hooked.

From sketching carnival goers to performing, sideshow banner painter Johnny Meah gradually became part of the carnival life. He began working as a clown; later he learned fire eating and sword swallowing. He went to Rhode Island School of Design for a year, but came back. In 1956 he worked a carnival tour with the Ross Manning Company, whose sideshow was run by Leola—also known as “Leo/Leola, Half Man Half Woman,” or Homer Tracy, a female impersonator. As Meah tells it, Leola hired him first to touch up older banners, then sketch new ones. His career was launched.

He was drawn to the mother vein of banner painting that came out of Coney Island. He read about Danny Cassela in an article in the New York Herald Tribune, headlined, “He Glamorizes the Freaks at Coney.” Cassela came from the tradition of Millard and Bulsterbaum, the original firm of local banner painters, handling not just Coney Island shows and traveling carnivals but Nathan’s Famous hot dog signage.

There was work for youngsters like Meah because the banners wore out quickly with the constant movement of the carnival. They were never considered art or even craft in themselves. Banners were regarded as disposable, Meah says. “It was like the old advertisements for potato chips: ‘eat ’em up, we’ll make more.” They were treated roughly, frequently discarded, used as impromptu tarps and replaced. But then the talent of the carnival performers was handled roughly, too.

In 1980 the Smithsonian mounted a show of carnival banners, and Life magazine did a story on them. This caught the eye of the Chicago dealer Carl Hammer, whose gallery also specialized in outsider artist, tattoo “flash” or designs, and other non-mainstream artists. A few years later, he contacted Meah and visited him in Florida.

Meah took Hammer around town of Gibsonton, where carnival people at the time retired. “It was sort of depressing,” Hammer says, “seeing all these sad side show performers in their little houses.” The banners were still thought of as disposables. Meah recalls, “When Carl came down here we had just burned about 50 old banners. When I told him, I thought he would have a heart attack.”

But Hammer found that few buyers shared his enthusiasm for the banners. He began to present them as folk art, like weather vanes, tavern signs or game boards, items popular among folk art collectors. Hammer also sold tattoo flash and the work of outsider artists.

Meah was amazed, he says, when Hammer marketed the banners as folk or outsider art. At first, he resented that. It suggested some guy scrawling on a shovel in Arkansas. Today he accepts what Hammer was doing. “Before Carl, nobody was collecting them so I came to terms with it,” says Meah.

But the problem with the “folk” label, of course, is that it risks obscuring the differences among individual artists or craftspeople. Banner painters differ greatly to one who knows the field. Meah says he admires two very different predecessors: Snap Wyatt and Fred Johnson.

Fred Johnson had no background of actual sideshows, Meah says. “He worked in a big loft in Chicago. He had his own vision of it all. It was like The World According to Garp—he painted the world according to Fred Johnson.”

Meah admired the way Johnson expanded on the stock situations. “For instance,” Meah says, “one perennial (act) is a woman in the electric chair. She gives the illusion that electricity is passing through her body. It radiates from her fingertips and toes. Usually the premise was some fanciful tale that she been hit by lightning or whatever. It’s done with a Tesla coil to surround a woman’s body with electricity, implying she can somehow endure it, or that she is sitting in an electric chair like a doomed criminal.

“Johnson probably painted 50 those of those. In one he showed the woman smiling, sitting in the electric chair in a penal institution somewhere, with stone walls. Over in the corner would be the executioner dressed, for some reason, in a fancy uniform with epaulets and braids. He looked like the doorman at the Ritz Carlton. And Fred Johnson, god bless him, would put in curtains and jungle scenery or French curtains. What the hell are the flowers doing there?”

He also became influenced by a very different sort of painter: Boris Vallejo, the king of the paperback dramatic cover painting. Meah admired the way Vallejo rang changes on clichés and conventions.

Probably the primary factor killing off the sideshow is sensitivity about the exploitation of people inside the tents. Some of the exhibits inside the tents of the sideshow were odd samples in jars, others were people with odd features. Gawking at the malformed and misshapen is downright primitive. But Meah argues that we have to see the history of the sideshow in the context of its time. “Many of these were so-called ‘attic children’ in those days. Families hid them away because they were ashamed. The usual scenario was that when the circus came to town, they met other people and peculiarities and found kinship and support. For the first time, they were part of a community of other people like them.

Now, Meah has written a book about the carnival, completed a novel and is working on another book. He has a website and even a downloadable font. He served as consultant for Carnivale, the short-lived HBO series about a supernaturally charged traveling carnival from the Depression. In fact, he seems to have followed all the advice consultants give people whose industries have vanished: build on your strengths, adapt to the new era.

“A lot of people in our computerized era don’t know that there are real people who actually do this stuff,” he says of banner painting. But for how much longer?

Sideshow banner painter Johnny Meah is a respected painter whose banners of sideshow performers hang in such places as the Smithsonian, the Barnum Museum in Westport, Connecticut, and Intuit: The Center for Intuitive and Outsider Art.