You are here: Home / TRAVELING SHOWS

Earliest Forms Of Entertainment For Families Was The Traveling Shows

After the Columbian Expostion in 1863, traveling shows began to branch out and bring the earliest forms of entertainment to  people in cities and towns across America. There was a wide range of tented Traveling Shows spanning entertainment genre from Minstrel Shows to Wild West Shows.  The International Independent Showmen’s Museum features a great number of  exhibits showcasing the traveling shows in America. On display are the Auto Thrill Show, Wall of Death, Freak Show,two headed human babies, Wild West Shows, Minstrel Shows, Girl Shows, The Viking Giant, the giant Al Tomaini and his wife (the Half Girl) Jeannie Tomaini, and many more. 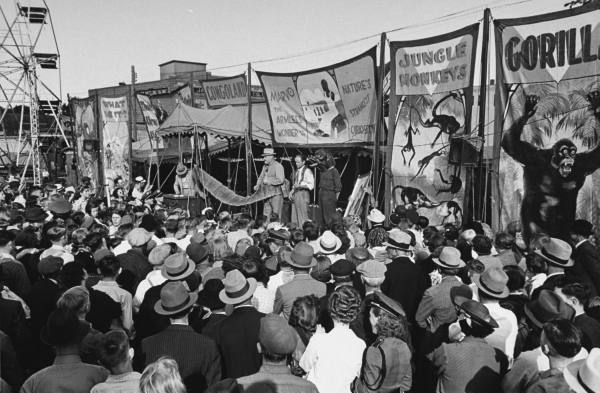 Many of the first, early motion pictures were shown on the midways of traveling shows.  Imagine what it must have felt like to see your first moving, motion picture. Gone now, in all but memory, are the medicine shows that traveled up and down American back roads bringing entertainment to all. Every county fair featured the Wall of Death where daring motor cycle riders performed death defying  stunts while riding the circular vertical wooden wall. Traveling Punch and Judy Puppet shows  brought family entertainment to children and adults alike. Giant tented circuses brought exotic animals and amazing performers while Carnival companies delivered thrilling rides and strange tasting new food on mile long railroad trains.

These shows crisscrossed America in every type of transportation imaginable from horse drawn wagons to brilliantly painted trains that seemed to stretch to the horizon and long caravans of decorated motorized trucks.

Traveling shows brought huge tented sideshows with mysterious human oddities to living two headed animals and spectacular magic acts. Every year people looked forward to the entertainment and fun that the traveling shows brought to their home town. Games of chance and skill offered people a chance to win all kinds of prizes  from a smoked ham or a decorative lamp to a plaster Kewpie Doll.  The traveling shows have been a colorful and intriguing part of American history, bringing entertainment to cities and small towns in America and adding great memories

that families have shared for well over a century.