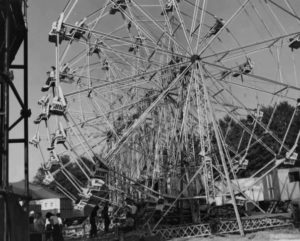 In 1893, 1.5 million people rode the very first Ferris wheel when it debuted at the World’s Columbian Exposition in Chicago. And for one young man, the magnificent creation of George Washington Gale Ferris Jr. would prove to be a wheel of fortune.

In 1893, W.E. Sullivan visited the Columbian Exposition, where he marveled at the original Ferris Wheel. Like George Washington Gale Ferris, Mr. Sullivan owned a bridge building business – Eli Bridge Company. As he took his first ride on Mr. Ferris’ Wheel, little did he know that his life was about to change forever.

“William Sullivan was so intrigued by the original Ferris wheel that he decided to make his own company to build and sell a portable version of it,” says Tim Noland, general manager of Eli Bridge Co., the business Sullivan founded in 1900 to bring his dream to life.

Sullivan, who came from a family of bridge builders, strategically chose the company name to deflect the skeptics.

“He was under a lot of scrutiny, so he left ‘bridge’ in the name – that way, he could still build bridges if need be,” says Noland.

As it turns out, the company has built just one bridge in the century-plus since its establishment.

Despite skepticism from his family and the business community, Sullivan remained fascinated by the Wheel and was determined to build one of his own. He later collaborated with machinist James H. Clements and together they began construction of their Wheel on March 23, 1900. This first “Big Eli®” Wheel debuted in Jacksonville, Illinois’ own Central Park on May 23, 1900. The Wheel was a great success and, in 1906, Sullivan incorporated the Eli Bridge Company by taking on capital investors to mass-produce his wheels.

Eli Bridge Company was originally housed in a building in Roodhouse, Illinois located right next to the railroad tracks for easy shipment and delivery. In 1919, a new building was erected at 800 Case Avenue in Jacksonville, Illinois, also next to the railroad tracks, and has been doing business at that address ever since. The plans included a room tall enough in which Sullivan could erect a #5 or #12 Wheel. The building has had several additions since and now is a 76,000-square-foot facility. The first wheel, Big Eli Wheel #1, now proudly stands in front of the factory.

In 1955, Eli Bridge Co. produced its first non-Wheel amusement ride – The Scrambler®. This new double-rotation ride was destined to take the amusement industry by storm and has since become one of the most recognized amusement rides in existence.

Today, Eli Bridge products can be found in amusement parks around the world and are traditional attractions at parks, family entertainment centers, county fairs, festivals and carnivals throughout the nation. Eli Bridge continues to innovate and change to meet the demands of our customers in the new century. Our new SpiderMania® ride has been a phenomenal success and our Next Generation Mobile Scrambler® is one of the easiest major attractions to erect and transport.

Today, Eli Bridge remains a family-owned company. Lee Sullivan, Chairman of the Board is the grandson of company founder W.E. Sullivan and President/CEO Patty Sullivan is the great grand-daughter. “We take pride in striving to keep the highest standards to which Great-grandfather (William E.) and Grandfather (Lee A. Sullivan, Sr.) adhered throughout their lifetimes. Their values were instilled in the heart of Eli Bridge Company with which Dad (Lee Sullivan) have shared and challenged my generation. Like them, we too, have a vision to build new rides with the quality of the old.”

Strong backs and a crew putting in a hard days work, erecting an Eli Ferris Wheel in 1949. There were no hydraulics. All of the work was done manually.