William F. Cody, better known to history as Buffalo Bill Cody, invented the myth of the American West. Without Buffalo Bill Cody, there would not have been “The Plainsman.” Not even books or television shows about the wild west. No “Gunsmoke,” “High Noon,” or “Shane.” Westerns made famous John Ford, John Wayne, Gary Cooper, and  Alan Ladd. It is all due to the Showman od the Plains, Buffalo Bill Cody.

The dime novelist Ned Buntline created the myth in 1873 with a play he wrote called “The Scouts of the Plains” . The production starred Buffalo Bill Cody (at 27 already famous as an Army scout and contract buffalo hunter), his friends Texas Jack Omohundro and legendary Kansas lawman James Butler “Wild Bill” Hickok, and a young Italian actress named Giuseppina Morlacchi, who played the innocent Indian heroine. The melodrama toured eastern cities and even though it was supposed to be more of a dramatic production, it was considered more of a light hearted production..

The Wild West Show traveled by train. In 1910, they were photographed on the depot platform at “Mo. Valley, Iowa.” (Photo courtesy of Harry Webb, the tall bronc rider with a white wild rag standing in the second row to the left of the fellow in pin-striped pants.) Nate Salisbury, a genius of logistics and a Civil War veteran, moved 1,000 horses, 600 cast and crew, and tons of baggage to the great cities of North America and Europe. He had the knack for putting Cody and Company where they could be seen by the most people.
.
The newspaper reviews were pretty bad. Not only was the cast  not great at their acting ability, but Hickok often appeared drunk onstage, forgetting his lines or making up his own. One night a stage light was bothering his eyes and with annoyance he pulled a revolver and shot it out, darkening the theater to wild applause. Another night, he drunkenly played a love scene with Miss Morlacchi all too well causing a scandal in the papers. Hickok the actor was a sort of Victorian Marlon Brando.

Backstage, Cody, Hickok, Texas Jack and entourage behaved like rock stars; all night booze-fueled poker games, fights, broken furniture, cast members carted off to jail, and irate theater owners complaints constantly ignored by Cody and Buntline. In Pittsburgh, Hickok got into a barroom brawl after the show against six men. This ended the run of “The Scouts of the Plains,” which closed that night. Buntline and Cody paid off the cast and crew, and Hickok put his sorely bruised body on a night train west, leaving Buffalo Bill Cody to start putting the wheels in motion for his own brand of wild west show. 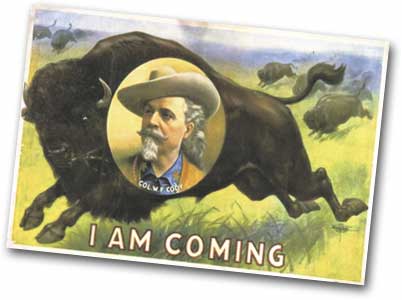 After gathering sufficient investment capital, “Buffalo Bill’s Wild West and Congress of Rough Riders of the World” premiered in Omaha, Nebraska, in 1883. Because he sought to present the authentic West, Cody refused to label the production a “Show,” fearing the audience might take the word to mean that the presentation was less than real. It would tour regularly until 1913. Over three decades its total cast and crew would number in the thousands. It would showcase at different times the riding or shooting talents of Pawnee Bill, Doc Carver, Johnnie Baker, Sitting Bull, Annie Oakley, wild Indians, cossacks and cowboys.

At any one time the sagebrush impresario took 1,000 horses, 600 cast and crew, and tons of baggage to the great cities of North America and Europe. A long row of 20-foot stoves fed this army three hot meals a day. The genius of logistics—the man who moved the production like Napolean moved armies—was one Nate Salisbury, a much-wounded Civil War veteran and survivor of the notorious Confederate prison Andersonville. He had the knack of putting Cody and Company where they could be seen by the most people. Salisbury’s death in 1902 marked the decline of Buffalo Bill’s Wild West.

Buffalo Bill Cody being a magnet for publicity meant that the troupe was forever having their picture taken, all over the world: New York, Chicago, San Francisco, London, Paris, St. Petersburg. He took advantage of new technology and had the show filmed with the new motion picture cameras. Many silent reels survive and can be found at the Buffalo Bill Historical Center in Cody, Wyoming. As documentary history they are fascinating. There were trick riders and charging Indians and the long white-tressed scout himself waving to the crowd while mounted on a beautiful white horse. If Cody had been born a generation later, he might have ended his days a Hollywood mogul.

The big draw—especially in European venues—were the Indians. In the states they were many times booed and jeered at as the killers of the sainted Custer, but in Europe were thought noble and brave. Sitting Bull, Iron Tail, Rocky Bear, American Horse, Young Man Afraid of His Horses—Buffalo Bill’s Wild West had on the payroll some of the legendary stars of the Plains wars. Sitting Bull was particularly admired.

He learned to write his name in order to sign—and sell—autographs, fell in love with oyster stew, and over-tipped shoeshine boys. He informally adopted Annie Oakley, and would have literally killed for her (he called her “Watanya Cicilia,” Sioux for “Little Sure Shot”). He sent most of his pay (and autograph money) home to his two wives and 11 children at the Standing Rock Reservation in present-day South Dakota. The rest he gave away. The great Sioux medicine man was a soft touch.

There were problems. The Indians were angry when 10 of their number died of flu in Barcelona. There were comic scenes, as when the Plainsman was formally presented to the Pope at Rome and the Indians laughed uproariously at the colorful dress of the Swiss Guards, to the Pontiff’s consternation and Cody’s acute embarrassment.

Buffalo Bill’s Wild West was wildly popular. Cody played for Queen Victoria, Czar Nicholas and other European notables. He taught the Prince of Wales to play poker. Presidents, prime ministers, Civil War heroes such as Sherman and Sheridan, and authors like Mark Twain all took in the show. The European nobility were sometimes made a part of it, as Cody put them in the stagecoach that was “attacked” by Indians. Large venues such as New York’s Polo Grounds drew crowds that would presage noteworthy 20th century sports events. In 1893 alone, six million people saw Buffalo Bill’s Wild West.

The grand successes were leavened with tragedy. In 1901, a train wreck in North Carolina killed 100 horses, injured scores of cast and crew members including Annie Oakley, whose injuries forced her into early retirement. And at this time Cody himself began to suffer from a plethora of health problems: rheumatism, prostate trouble, uremic poisoning and other kidney ailments. Many of these ills were attributable to his lifelong fondness for whiskey. He drank in his dressing room, on trains, in saloons, and at the poker table. He was pretty well pickled in the last two decades of his life.

In 1905, he sued for divorce from Louisa, his wife of 40 years, because he alleged that she tried to poison his whiskey. Mrs. Cody’s story was that the drug was a popular Victorian-era anti-abuse-type medication called “Dragon’s Blood” (which opened the sluices at both ends), that she hoped would get the famous scout on the wagon. The divorce was not granted.

The booze might have clouded his usually good judgment, when in 1906 he contracted with the retired General Nelson Miles to film a reenactment of Miles’ triumph over Sioux Ghost Dancers at Wounded Knee in 1890 (an event that probably would have been prevented had not Cody’s peacekeeping mission at the time been stalled). The general was a stickler for detail and demanded that Cody hire 11,000 extras, as that was the size of his command on the frigid, fateful day. Buffalo Bill convinced him that 300 would do; they could film that number over and over to give the illusion of a great army. Miles acceded the point but insisted it be shot on location in South Dakota at the actual battle site.

This didn’t sit well with the Sioux who were to be in the movie, as they considered the Wounded Knee Creek area sacred ground. The wise and ever-faithful Iron Tail (whose handsomely noble features were the model for the Indian Head nickel) quietly informed his old friend Cody that there were rumors of warriors planning to use live ammunition, thus giving Miles (who would play himself) his just deserts and avenging their slain ancestors. Had this happened it would have made cinematic history. As it was, Cody diplomatically convinced Miles of the positive attributes of another location, the Sioux replaced bullets with blanks at Cody’s behest, and the general—unaware of the conspiracy—survived into boorish old age. The Indians died on cue in a forgettable production.

In 1913 Buffalo Bill’s Wild West went broke in Denver. The new entertainment entity of Hollywood (which Cody had indirectly contributed to with his show filmings and reenactments) was capturing the American public’s attention. Charlie Chaplin, Buster Keaton and their ilk cavorted on the silent screen as an aging Buffalo Bill glumly performed a poor parody of his former self with the Sells-Floto Circus, all the while suffering health problems.

His uremic poisoning flared up as he visited his sister May Decker in Denver in January, 1917. A local doctor gave the legendary 70-year-old hard-living impresario 36 hours to live, and to the annoyance of May—a pious woman interested in prayer and a deathbed vigil—Cody called on friends present for one last big poker game. On a cold winter day the most famous man in the world exited the stage in character.

The Museum is currently closed due to the Corona Virus.

Closed due to the Corona Virus.