You are here: Home / Carnival Shows / The AT Show

Athletic Shows Drew Quite A Crowd On Carnival Midways

Do you know about Athletic Shows from back in the early days of the carnival? 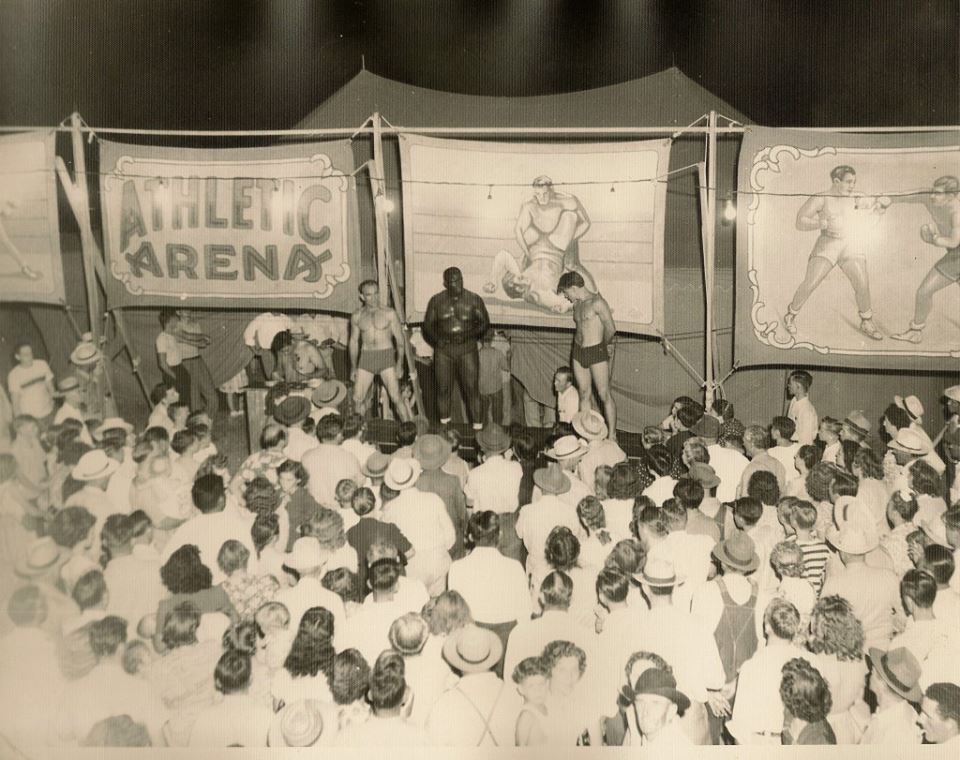 Athletic Shows or AT’s as they were known in the business, were popular long before cable TV networks like ESPN and HBO brought professional boxing and wrestling matches into family homes as a legitimate sport.
Ex professional boxers and wrestlers who were not well known nor easily recognizable at the time, took to the ring on carnival midways at Athletic Shows when their time, due to age or their records in the professional ring grew short. They advertised that they would take on “all comers” and every town had at least a few who thought they could qualify.

Usually, during the early part of the match, the old ‘pug’ knowing how to easily slip a punch and would act like he was almost out on his feet. A chicken or thin rubber bladder filled with blood and placed strategically into his mouth before a match was easily bitten into to give the illusion that he was bleeding profusely. These were affectionately known as ‘Cackle Bladders” to the carnies .

Then the wagering got underway, and bets were placed with the heavy favorite being, of course, the town “mark”. The wagering might go on for a round or two with the sucker apparently winning each round to ‘up the bets’. Finally the cagey pro, knowing all the ring moves both legal and illegal, would commence to give the misguided ‘townie’ a boxing lesson in memorable fashion, usually culminating with a knockout, and all the side bets would be summarily collected. This was indeed, a brutal way to make a living.
Interestingly, the late veteran showman James E. Strates got his start as a young man in the ring as a wrestler in an AT Show going under the stage name “Strangler Lewis”.