You are here: Home / Sideshows / The Sideshow Fat Lady 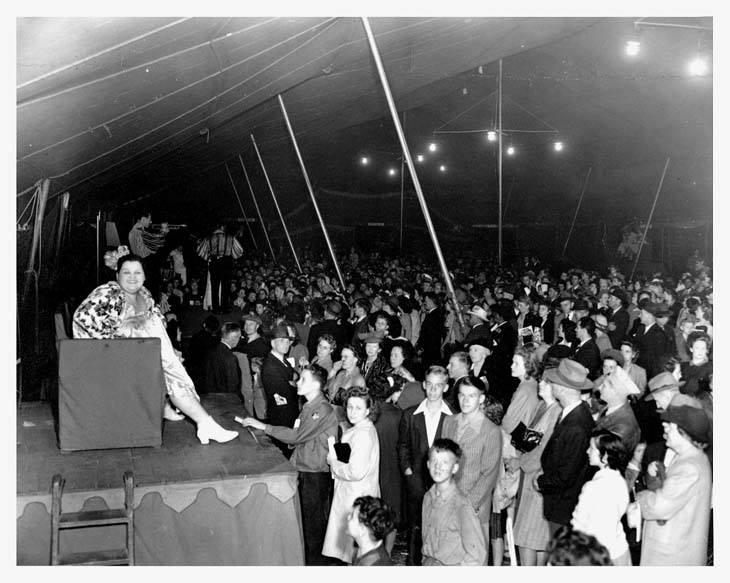 Packing Them In……
The fat lady is perhaps even more of a tradition in the sideshow than the fat man. One such performer, who is shown in this photo taken on the Ringling Bros. Side Show in 1943, was Baby Thelma, who claimed a weight of 619 pounds at the age of 18.
By 1940, when she appeared with the famous Baby Ruth Pontico, Thelma was claiming a weight of 655 pounds (probably in order to compete with Pontico’s alleged 800 pounds).
Despite her size and ever the flirt, Baby Thelma was quite popular with the guys as many fat ladies were.
Her show career of more than 20 years included the Canadian-based Conklin Shows (1939), Ringling Bros., Barnum & Bailey Circus (1941-1944); Victory Exposition Shows (1948) and a 1959 tour of Jamaica as part of a comedy stage show, “A Funny Business”.
When interviewed in 1948, Thelma seemed content with her life, enjoyed traveling, and, when asked what she thought of a fat ladies’ tendency to die young, she shrugged, “Some do, some don’t.” At the time she was courting Frank Amand, a 125-pound concession stand operator who eventually became her husband. She was told by a doctor in 1954 that she needed to slim down to 200 pounds or risk an early death. She complied, but after shedding 73 pounds, her husband became ill with tuberculosis and Thelma had to return to her job as a fat lady.
Thelma died in Syracuse, New York, on September 2, 1961. She was said to have been only 35 years old