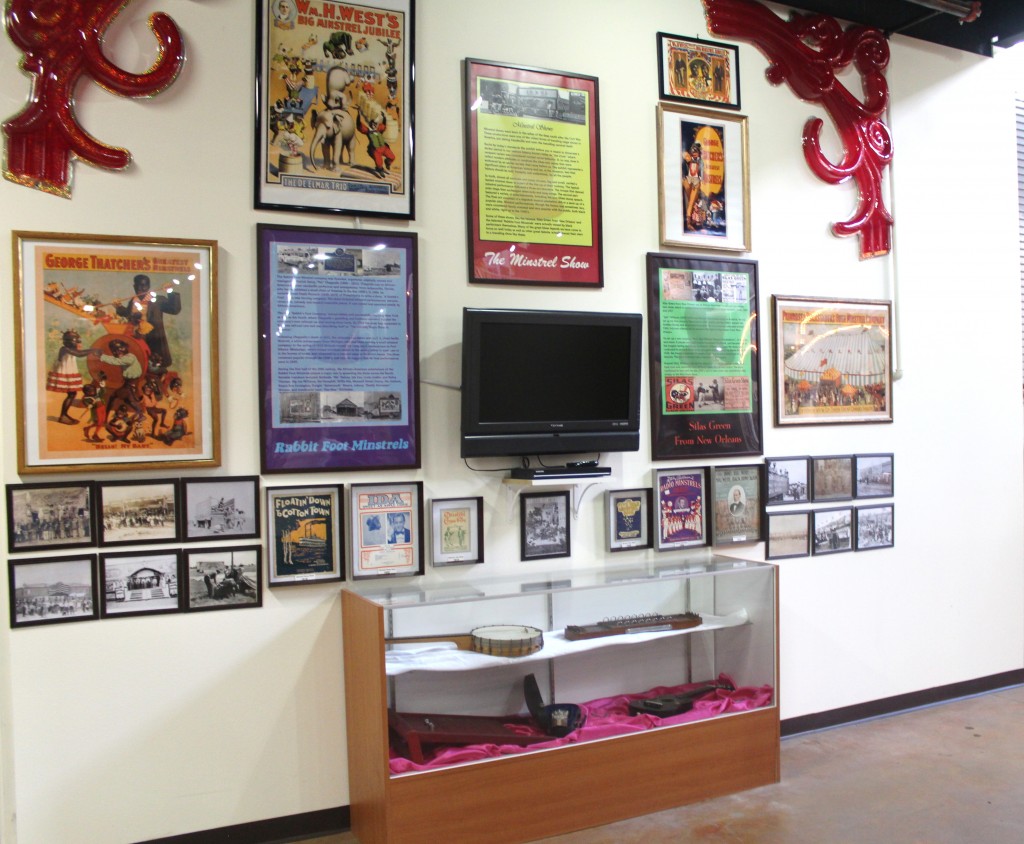 Minstrel shows were born in the ashes of the deep south after the Civil War. These productions were one of the oldest forms of traveling stage shows in America, pre dating Vaudeville and even the travelling carnival itself.
Racist by today’s standards the exhibit before you is meant to showcase a darker period in our nations history known today as “Jim Crow” where rampant racism was considered normal social behaviour. In no way does it reflect modern attitudes or condone the ideas and values that were embraced by an earlier society that came before us.

The exhibit represents a significant piece of American history and we, at the museum, feel that history should be told and understood . . . by all the people.

In truth, almost all carnivals and many circuses, big and small, carried a tented minstrel show as a part of the line up of their midway. The typical minstrel performance followed a three-act structure. The troupe first danced onto stage then exchanged wisecracks and sang songs. The second part featured a variety of entertainments, including the pun-filled stump speech. The final act consisted of a slapstick musical plantation skit or a send-up of a popular play.

Minstrel performances, though the humor was sometimes racy, were considered family oriented and very popular with the public,both black and white, right up to the 1940’s.

Some of these shows, like the famous ‘Silas Green From New Orleans’ and the talented ‘Rabbits Foot Minstrels’ were actually owned by black performers themselves. Many of the great blues legends we have come to know so well today as well as other great talents, actually traced their start to a traveling show like these. 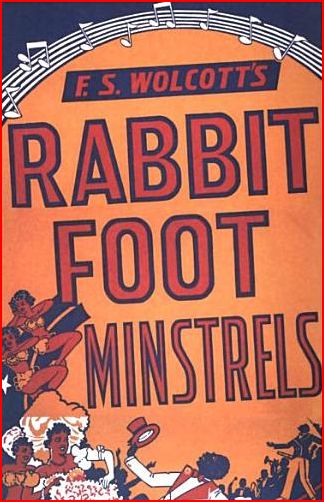 Chappelle was an African-American former vaudeville performer and entrepreneur from Jacksonville, Florida, who had established a small chain of theatres in the late 1890s.

In 1900, he commissioned Frank Dumont (1848–1919) of Philadelphia to write a show, ‘A Rabbit’s Foot’, for a new touring company. The show included minstrel performances, dancers, circus acts, comedy and musical ensemble pieces. It was owned and operated totally by African-Americans.

The new “Rabbit’s Foot Company” toured widely and successfully, reaching New York as well as the South, where Chappelle’s gambling and business successes funded the company’s own railroad car and touring show tents.

By 1904 the show had expanded to fill three railroad cars and was describing itself as “The Leading Negro Show in America”.

Following Chappelle’s death in 1911, the company was taken over by F. S. (Fred Swift) Wolcott, a white entrepreneur from Michigan who had been running a small minstrel company.

In the spring of 1918 Wolcott moved the company’s headquarters to Port Gibson, Mississippi, where troupe members stayed in the winter, either in train cars or in the homes of locals, and rehearsed on a covered stage at Wolcott’s home.

The show remained popular through the 1940s, and records suggest that its final performances were in 1959.

Silas Green from New Orleans was an African American owned company and run variety tent show, which in various forms

“Eph” Williams(1855 – 1935) was the only black circus owner in America. He had set up his first circus in Wisconsin in 1885 and by the mid – 1890’s owned 100 Arabian Horses and employed 26 people. His circus business collapsed around 1902 but soon afterwards he acquired the rights to Silas Green From New Orleans.

He set up a new company “Prof.Eph Williams Famous Troubadours,” to tour the tent show. It played one-night stands throughout the South, and became one of the longest-lasting tent shows in America. Williams managed the show and continued to perform horse tricks, alongside musicians such as Bessie Smith. By 1928, the troupe comprised 54 people including a 16-piece
band and 16 girl dancers. The main show tent had a capacity of 1400 people.

Around 1922, Williams sold half the share in the show to Charles Collier, who took over sole ownership after Williams’ death in the mid-1930’s. The show continued to tour until the late 1950’s, and in later years was sometimes billed simply as the Silas Green Show.