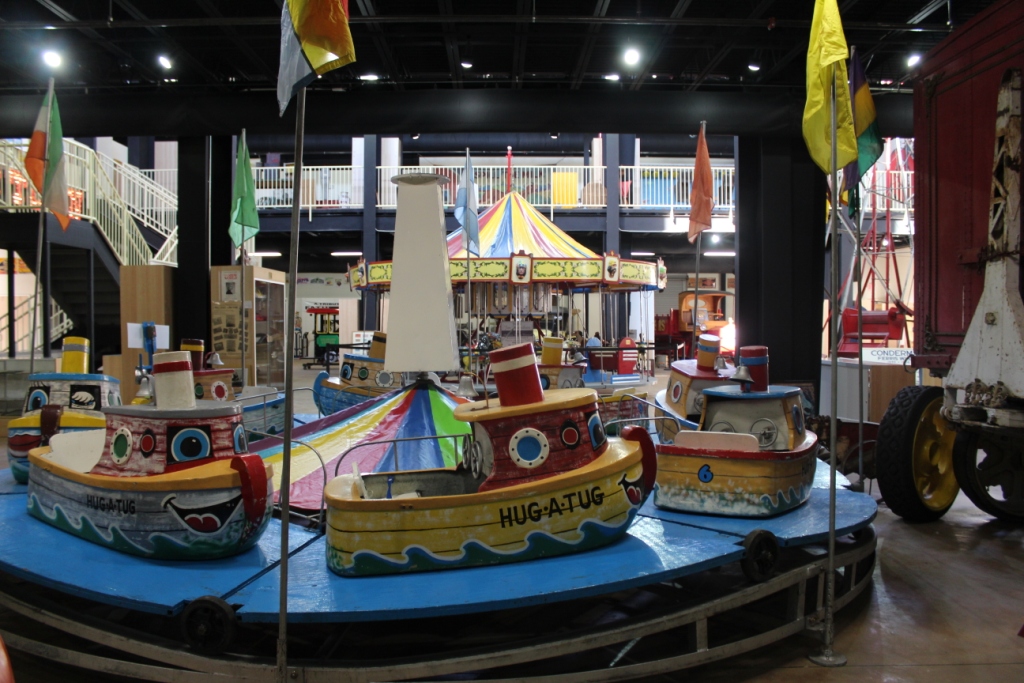 When you first visit the museum you will certainly be amazed to see actual rides inside. There is a Conderman Ferris Wheel, 1950 American Beauty Kiddie Carousel, Tugboats, bumper cars , and more. The Museum features actual Antique Carnival Rides so you can see what the history of traveling shows was like and how a version of those early rides are still used today.

Let’s trace some of the history of the first carnival and park rides you are familiar with and the inventions that made them be portable enough to travel from town to town.

The Ferris wheel made its debut at the 1893 World’s Columbian Exposition in Chicago. At least that’s what George Washington Gale Ferris, Jr. always said. One year earlier, William Somers designed and built three wooden wheels—each measuring 50 feet in diameter—in New York and New Jersey. Both men owed a debt to the similar, yet awkwardly named, wooden “pleasure wheels” invented in 17th century in Bulgaria. There were many versions of the Ferris Wheel that followed.

Electric cars may seem like a modern advancement, but we’ve been driving them—and more importantly, crashing them—for a century. There’s some dispute over who invented the road-raging carnival favorite, but one thing all scholars can agree on: how difficult early versions were to steer. We have some early bumper cars are on display at the International Independent Showmen’s Museum.

Carousels with wooden horses were first used to give horseback riding lessons to Turkish and Arabian cavalry members. When crusaders returned to Europe, they brought the device back with them. The spinning attraction became especially popular in France, where 17th century riders tried to pierce a target while moving at high speed. The power source? Actual horses! The first carousels used donkeys – that is where the name came from. They were also powered by steam and eventually motor powered.

Although the first patent went to LaMarcus Thompson in 1885, he wasn’t the first person to make a rollercoaster. Modern roller coasters descended from “Russian Mountains,” winter sled rides that were popular in 17th century St. Petersburg. (Situated on icy hills, the sleds topped out at 200 feet!). Meanwhile, in the states, a Pennsylvanian mining company constructed a “gravity railroad” in 1827 to move coal. But on slow workdays, they charged thrill-seekers to take it for a spin.

Unmarried couples of the late 19th century needed a place to canoodle in public. Love — or, at least hormones — found a way with the boom of so-called carnival “dark rides.” As couples wound through the tunnel of love by water or tracks, they were treated to alternating moments of romance (to set the mood) and fright (to encourage an arm over the shoulder).

Until the 1970s, mechanical bulls were strictly used to train cowboys and rodeo competitors. Early practice bulls were basically large barrels suspended from four ropes (people could jostle the barrel by tugging on the ropes or using a pulley mechanism.) The mechanical version, however, was popularized by a Texas businessman who wanted to make his bars more popular.

Patented in 1914, the first whip was made for Coney Island. The attraction—which tamely slings riders around an oval—is rare nowadays, but you can find original models scattered around some old-school parks.

The giant, revolving ride that moves around, up, and down in a wave-like fashion was originally a German attraction known as the Trabant. American innovators brought a bigger and better version stateside, dubbed it The Wipeout, and the rest is history … as long as you’re 48″ tall.

The ride that launched a thousand stomachaches sprang from the mind of woodworker and waterslide maker Herbert W. Sellner in 1926. It made its debut at the Minnesota State Fair one year later. The story goes that Sellner experimented with the ride’s design by placing a chair on his kitchen table, making his son sit in it, and then rocking the table. The ride is now manufactured in Texas.

The Twist. The Gee Whizzer. The Grasscutter. That which we call a Scrambler has many names, because naming it The Ride That Looks Like It’s Going To Collide Into Other Cars, AHHHHHH! is too cumbersome. This frightening/fun ride was first produced in the UK in 1959. Since then, each decade has given it a new name and pattern of motion, but the thrill’s the same.

The modern log flume has been around since the early 20th century, albeit in more sedate versions. Old mill rides used tracks to guide boats through dark tunnels and over a few bunny hills. But as rollercoasters became wilder, those old mill rides had one direction to go: wetter. The splash-intensive modern versions first began surfacing in the early 1960s.

It’s easy to imagine someone looking at a carousel and thinking it may be tame. What if we took out the horses, replaced them with swings, and raised the whole thing a few hundred feet? Now we’re talking! Although swing rides were popularized in the 1970s, they’ve been around for decades. Postcards of California’s Idora Park show a wave swinger as early as 1908!

People have been getting soaked on these flat-bottom boats since 1884. J.P. Newburg invented one that ran along a greased wooden track down the side of a hill in Rock Island, Illinois. It splash-landed in the Rock River and was tugged back to shore by an attendant. It’s been an amusement park staple—and a great way to cool off on summer days—ever since.

First seen at the UK’s Blackpool Pleasure Beach in 1906, the ride is a high tower with a curling slide nestled against it. Customers climb stairs inside the tower before riding down to the bottom.

Invented in 1933, the Loop-O-Plane ride consists of two “plane” compartments on either side of a tower that act as counterweights as they loop around one another. It was originally a flight simulator – the Cuban government even ordered some to train their pilots – but it didn’t really take off until civilians jumped in for a quick, fun ride.