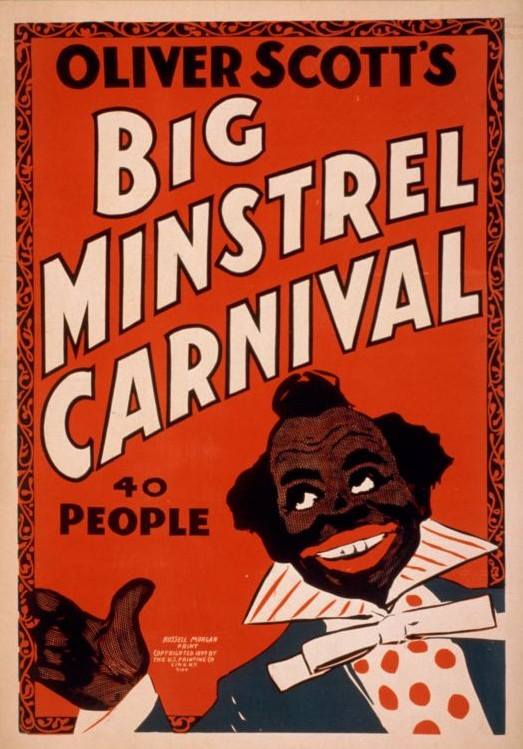 The ‘Minstrel Show’ got it’s roots in pre-civil war America during the dark days of slavery and continued well into the 20th century. Like many of the things we now consider socially incorrect, it was a product that, for better or worse and for more than a hundred years, was symbolic of it’s era. Minstrel Shows are a big piece of Carnival History.

The minstrel show featured stereotypical people in demeaning situations that, at the time, were considered ‘all in good fun’. Blacks were portrayed as childish but happy negroes who through laziness and ignorance, found themselves in unlikely but humorous situations that were acted out on stage. Musical numbers featuring banjo and fiddle music were set against a backdrop of painted images of a per civil war deep south and comedians, male and female, performed in blackface doing humorous sketches and various dance routines.

Most carnivals carried a minstrel show and some of the more famous ones like “Silas Green From New Orleans” or “Lasses White” were legendary. Silas Green had several of his minstrel groups on tour at the same time that traveled across the country to packed houses in their own private railroad Pullmans.
Known as ‘Jig Shows’ by everyone both black and white in the carnival business, they were a major attraction at some of the biggest fairs and often rivaled the largest shows on the midway in both size and talent.

Ironically, while most performers were white people playing at being blacks, black people had to wear what was called “white face” to disguise themselves to play the same roles.

To see an interesting piece on The Minstrel Show History – watch the YouTube video below: