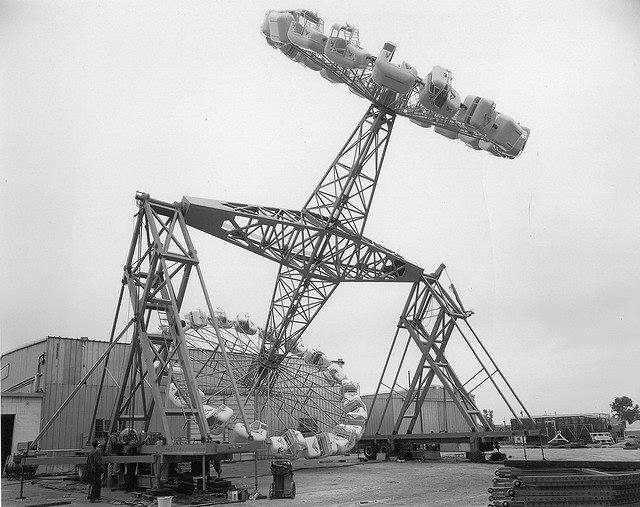 Problems plagued the Chance Tumbler from the start. There were no form-fitting seats and the cars were very top-heavy and impossible to keep upright once the ride commenced.

The G force  causes the cars to spin inward, with the bottom facing out. With a rider however, the balance shifted to the top of the car, hence you immediately went upside down once the ride was in motion.

These cars spun VERY fast and once the hourglass was turned over you lost all ability to control the car. As the bottom went up, the ride changed from a Tilt-a-Whirl rotation to a Ferris Wheel rotation . . . then back to the former only now you were a hundred feet in the air spinning very fast, upside down then back down again, it was absolute, uncontrollable terror for 7-8 minutes.

The G force Fair Ride Called The Tumbler was definitely in the thrill ride category.

There are very few pictures of this ride at any of the three spots it called home (Six Flags Georgia, Rye Playland, and finally Coney Island),

After leaving Six Flags it did the state fair circuit for a couple of years and then went to Rye Playland for one season in 1975.

The McCullough’s bought the piece in 1976 and attempted to unsuccessfully operate it but the ride was plagued with technical issues and rarely operated. It sat in pieces next to the Thunderbolt Turnaround on Coney Island in New York until the mid-1980’s when it was finally sold for scrap.