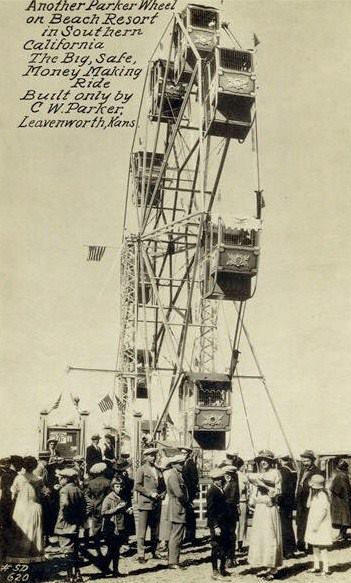 Many people jumped on the Ferris Wheel building band wagon at the turn of the century. Showmen needed a smaller, portable version of George Ferris’s giant invention for their new fangled midways and inventors were quick to answer their call.

In the beginning Mr. Sullivan (Eli Bridge) and Mr. Conderman went toe to toe over who was going to own the patent rights to this modern invention. The court finally handed down a ruling that an individual couldn’t own the rights to a Ferris Wheel, only individual aspects of it. That opened to door to all kinds of backyard designs. Some were virtual death traps but a few proved to be quite practical.

This one, built by the Parker Company, offered everything the contemporary showman of the day could ask for and the reputation of the company as a safe and reliable ride builder was unquestionable. Perhaps they were difficult to move every week or open seats were preferred by the public over the gondolas, but for whatever reason the attractive Parker Wheel never caught on like the Eli or Conderman designs.

Conderman’s factory burned down in 1910. He moved to Chicago and never made another ride leaving the Ferris Wheel building field wide open to the Eli Bridge Company which is still building them today pretty much as they did over 100 years ago. You can see a perfectly preserved 1910 model of one of these magnificent Parker Ferris Wheels still in operation today at Crossroads Village in Flint, Michigan. It is the only one of its kind that has survived through the ages and has been lovingly restored and meticulously maintained.